Life As We Show It - Writing on Film 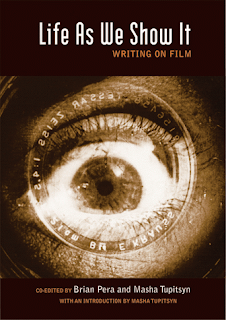 Life As We Show It is a unique collection of essays, imagined scripts, and personal reflections by more than 20 writers on how film has shaped much of their lives and their opinions.  Not all of the cited films are blockbusters, and the influential titles are not meant to gather a "best of" collection like you'd find on A&E.  Rather, these movies are personal touchstones, relevant in ways that are unique and sometimes perplexing.  Some titles are virtually unknown, and the focus isn't so much on the film but the viewer's reaction to it or to the memories it evokes.

The standout essay for me was Rebecca Brown's title "My Western", a fascinating and multi-layered investigation into several western movies, her own family's history, and the concept of 'happily ever after'.  Her signficant film is Shane, the western classic that is mostly known for its lines "Come back!  Shane, come back!"  The young boy is brokenhearted watching Shane leave.  Brown combines both plot details and anecdotes from the real-life actors with events of her own life, particularly that of her father.  She finds parallels in the lives and deaths of both her father's disappearance and Shane's.  The effect is stunning, making the film seem more personal, and notes the synchronicity between real life and film that is often forgotten.  With Shane and other westerns, she connects that usually unspoken need we have for a hero.

She writes:  "A classic western sunset and a stranger on a horse is passing through.  We fall in love. With him and with the stories we imagine he could tell but won't.  We fill his secret past with our desires and the things we are afraid we cannot do.  We do not want to know what he is not.  The stories we will tell of him will save us from our lies."

She doesn't end it there, however.  She makes an impassioned argument on why Shane had to leave, and why a happy ending was impossible.  The boy wanted him to come back, but he was wounded and near death.  If he came back, it would only serve to traumatize the boy more;  coming back to die in the child's arms wouldn't satisfy the audience either.  And so it is with other classic films, such as ET (which is addressed in another essay by Dodie Bellamy):  ET had to go home, could it really have ended with him becoming a member of the family?  I immediately thought of Citizen Kane in a similar light:  Rosebud had to be burned in the fire, if it been preserved as a museum piece, the film would never have become as iconic.  The ending required a loss.

Elizabeth Taylor is a topic of an essay by Wayne Koestenbaum, where he muses on her different roles, her costars, and her personal life, and how all three collided in various ways to create the icon she has become.  Some of it is gossipy and silly, and much of it is tragic.  I had never realized how many of her costars died tragically, but the point of his essay isn't simply a biography from a fan.  It's an explanation of what it means to be a survivor "and how to endure division."

To be clear, many of the essays have far more to do with the writer than the films themselves, so it's not a title that is aimed at a film student.  It is an interpretation through their eyes and based on their lives and their own personal loves and losses. 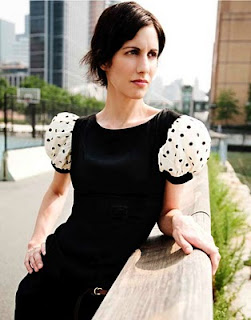 Special thanks to Stacey of City Lights Books for the Review Copy.
It is available at http://www.citylights.com/book/?GCOI=87286100680350
or at Amazon.com and other online retailers.
Editors Brian Pera and Masha Tupitsyn shown at left.
Posted by Amy at 10:48 PM