Translated from the Italian by Antony Shugaar
“This was underworld business: it was a mathematical certainty that it was going to end badly… Somebody was going to die. That was the only thing we knew for sure as the car raced eastward in the night.”

It starts with a kidnapping that makes little sense, and moves nonstop into one of the most enjoyable literary treats I’ve read this year. Even though this crime novel is serious business, there’s an air of humor that surrounds a trio of ex-cons and bad guys that are called in to solve the crime. Yep, these guys, having paid their dues as tough guys and retired from that life of crime, now just want to sit back and drink Calvados, eat pasta, and listen to the blues. Except for the lead, Marco Buratti, who also happens to be addicted to home shopping television shows.
The action is non-stop as it crosses through Italy and into the Balkans as the three men try to solve two mysteries. They had previously got involved in a hit that went wrong, the moral of which was, “know who you do business for and why before you shoot someone.” Since they didn’t obey that rule, they have to backtrack and solve that before the kidnapped woman can be found.

The characters that they run into are just that: characters. Carlotto makes them memorable, with little clues that make them feel much more complicated than just a simple definition of “bad guy”. Drug smugglers have egos and their own tragic flaws, of which these experienced searchers exploit, while at the same time they lament,

“Why do Mafiosi always seem to have one useless son?”


This leads to an amusing conversation as they analyze The Godfather and The Sopranos to point out just which characters were intellectually-challenged. The rapport between the three is priceless, as they unquestionably back each other up, which would seem unlikely for the world they live in. And what a world that is, when drug smuggling and police corruption is impossibly powerful, with so many innocents thrown into the conflict.

I can’t even begin to explain why this book was so much fun, given the subject matter was serious and at times, appalling. Perhaps it’s the universal simplicities that unite everyone-good or bad-the power of a good meal? A view of the sea? The comfort of a regular table at the trattoria?


Special thanks to Europa Editions for the Advance Review Copy.

Safe from the Sea by Peter Geye...now in Paperback!

Safe from the Sea by Peter Geye

For those who haven't yet read this fiction novel yet, be advised it's out in paperback now from Unbridled Books!  It was in my top-four books of last year, and I read a ton last year!

It's a literary fiction title that explores the relationship between a father and son who've held a long-standing silence, with the backdrop of a horrifying ship wreck.  Family mysteries unravel and the two main characters are both compelling.

Enjoy this over the fall, and wear a sweater (the descriptions of the cold at times will make you shiver).
Posted by Amy at 2:01 PM No comments:

﻿ ﻿
﻿Today I was doing research on a completely different topic, but found this website, www.geology.com/nasa.  Amazing stuff....images of volcanoes, glaciers, cloud formations, etc from satellites.  Several were a slide show, one of which is above, about colliding galaxies.  The thing is, and I am completely confused at how this is possible, is that they seem to have before and after pictures of the collision.  At least, that's how it appears.  If you need a break from your books, check out the images....
Posted by Amy at 7:42 PM No comments:

From Chad at Open Letter:

"You may already have heard about this, but to mark the fourth anniversary of Three Percent, we just released a $2.99 "best of" ebook entitled "The Three Percent Problem: Rants and Responses on Publishing, Translation, and the Future of Reading." 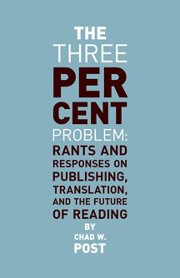 As with other Three Percent activities, the point of this is to help support literature in translation. Which is why all of the proceeds from the sales of this ebook will go directly t...o paying translators. So you can think of this as a sort of $3 donation . . .


To try and game the system (a bit), I'm urging everyone I know to buy this book today, Friday, September 16th. That way our sales ranking will jump up and will help us get the word out to people who don't normally support literature in translation.


These pieces are organized into a number of parts designed to provide an introduction to the contemporary publishing world. Ranging from pieces about the economics of publishing literature in translation, to explanation of the very different publishing scenes found in different countries, to profiles of translators, to mini-rants about book marketing, technology, and 99 cent ebooks, "The Three Percent Problem" is kind of like Andre Schiffrin's "The Business of Books," but with more swearing (and jokes). "

Three bucks is a cheap donation for a worthy cause and looks to be a great read as well...if you've ever listened to one of their podcasts, you know this will be snarky and fun!

"...And you turn
back to your first memories,
when you were the one
and even a trip to Kmart
had the potential for greatness.
Your whole life you waited
for that moment when purpose would be defined.
Gradually the troll moved out of your closet,
and you came to agree with Hoffman,
that indeed Kmart sucks.  But still you wait." 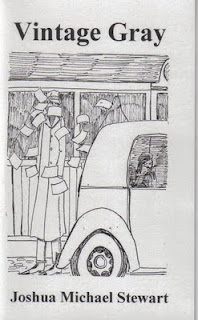 From looking at punctuation in an entirely literal light to analyzing Jimmy Stewart's voice, Joshua Michael Stewart's collection takes a different angle to look at things we see every day.  Concrete poetry with stark visual images and a gentle wit combine into poetry that is easily readable, even when at certain points you have a sharp intake of breath at just how sneaky he threw in that raw wire of emotion.

There's something fun about his poems, even when the subject is not joyous.  His choice of topics make you happy that someone still thinks about things like Bing Crosby's voice or who can describe that moment of silence after a mother slaps her child.  In "Vintage Gray", he allows an old radio show transport him to a place in the past which softens his present.  He captures the thoughts that occupy us while we exist in the present and imagine places we've never seen but that feel like memories.

In "You Are What You Eat", Stewart describes life as a butcher, "a hook in my back", and wanting to quit.  His plea, "but I don't have the guts," mixes humor and the sad reality of being stuck without options, and the way your viewpoint changes on observing those making their own choices.

My favorite of the book is "Ripping a Charles Simic Poem Out of The New Yorker", as the character plans a significant crime (at least to the nasty saleslady), but the trail of subscription cards falling out of the magazine are surely going to give him away.

There's nothing overly conceptual or meta-physical about this grouping of poems. This is a collection of reality, askew at times, but pictured vividly, with all of its shadows and light significantly focused.  Of all, I came away from the book smiling at the wit that thinks of elephants in pajamas and of playing poker under a church pew.


The chapbook is available at http://joshuamichaelstewart.yolasite.com/.
I purchased my own copy at that site.
Posted by Amy at 9:40 AM No comments:

Animalinside by Laszlo Krasznahorkai and Max Neumann, and Why Your E-Reader Can't Touch This 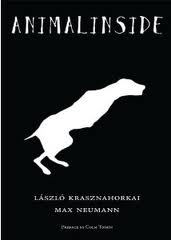 Translation from the Hungarian by Ottilie Mulzet

Sure, you could probably read the text of this on a Kindle or Nook.  But you'd be missing everything, and I don't just mean the Neumann images.  This book actually smells good!  It feels good.  It's a tactile experience that engages your eyes and other senses, while your brain tries to solve the mystery of who is the Animalinside.

First off, this is a novella that started with a Neumann painting that inspired Krasznahorai's text about a creature that defies easy description.  After that, Neumann provided more images with the same dog-like beast, to inspire further chapters from the Hungarian author.  Prefaced by Colm Toibin, who states that the author "stands closer to Kafka than to Beckett, but he is close to neither in his interest and delight in verbal pyrotechnics, in allowing the sheer energy of his long exciting sentences full sway."

The monster of the story, if indeed that is what it is, is trapped in a place where he is excluded and in pain.  "...I don't even exist, I only howl, and howling is not identical with existence, on the contrary howling is despair, the horror of that instance of awakening when the condemned--myself--comes to realize that he has been excluded from existence and there is no way back..." 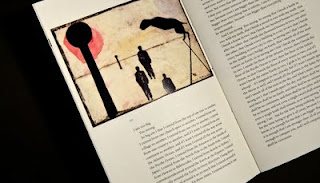 The words of the beast, shown in the images as a sort of fierce two-legged dog, are almost always horrifying...caged, it waits for release to wreak havoc and battle for kingship over a wasteland of earth.  At lighter moments, though, it speaks almost in a panic over the search for its food dish, but the threats he makes about its loss are nothing adorable.

Much of the imagery and words confuse me...I sense that a deeper measure of the meaning involves the ugly results of binding the voices of small, defenseless peoples until their defense is their only option.  Their obsession.

And about that, "smells good" remark?  New Directions designed this as part of their Cahiers series, #14, and it's designed in a seven step printing process that makes for thick, waxy pages, with layers of thick inks and contrasting textures.  Maybe it's all the chemicals involved, but it smells and feels amazing.  Heirloom-quality, if that's possible for a novella.


Special thanks to New Directions for the Review Copy.
Posted by Amy at 3:41 PM 2 comments: