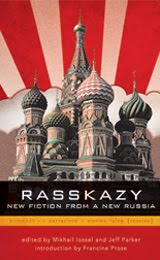 Edited by Mikhail Iossel and Jeff Parker
Rasskazy is a collection of excerpts and short stories set throughout Russia, and provides a more positive depiction of Moscow than last week’s Moscow Noir. This is completely different from other selections I’ve read from Russia, and much of it has a level of humor not always associated with Russian writing.

The “New Russia” is evident everywhere, as there isn’t many references to the old Cold War struggles of poverty, crime, and brutality. They may make a brief appearance, but it certainly isn’t a theme. These appear to be younger writers, creating a new and lighter style. In They Talk, an eavesdropper hears the secrets and silliness in other people’s conversations: “…and until the dog kicks the bucket, you’re not moving it from that apartment.” Or, “…when he loved me, I wasn’t jealous, and when he didn’t love me-I was. I’d start calling, aggravating both myself and him, until one time an ambulance came for me.” The little fragments of conversation are both poignant and funny. They could be heard anywhere, and that re-emphasizes the theme a “new Russia”.

Another story, A Potential Customer, reveals what a young man gets out of his visit to an old friend: “I must tell others of my life, in order to see my reflection in their pupils.” As he visits Moscow after an absence, he’s waiting for his reappearance to be significant. He goes out and stands in the square. “I was prepared to be noticed, my plans had allowed for it as an integral part of my vacation, but Moscow sailed past….the depressing suspicion crept in that this time, as if out of spite, everything would be just as it had been a thousand times before….My native city would not recognize me.”

Or the lonely blogger, in Have Mercy, Your Majesty Fish, who finds a mysterious commenter is the only one of many who understands her posts. His cryptic responses leave her hanging…

My favorite of the collection is Bregovich’s Sixth Journey, by Oleg Zobern, about a professor who travels out of Moscow for some quiet space to work on papers. His drunken neighbor keeps a starving dog in the frozen yard. “One time I thought I saw barbed wire strung around his doghouse, with little guard towers standing around it. That would make the space between the house and the shed, where Ivan Denisovich’s doghouse sits, into a little one-dog prison camp.” The narrator feeds the dog, plays his music too loud, and tries to understand the Russian literature he assigns his students. “I find it hard to study this stuff because it’s so close to me; it’s where I live, in a way. The further back you go in the century, the simpler it is, everything’s in its place….I divide the writers into the living and the dead and begin with the dead…The dead: they’re like family to me already.” In the end, the dog named after Solzhenitsyn’s famous prisoner is released to roam free. An action that becomes symbolic of the Russian people in this new time as a whole.

The collection is huge, and would make a great selection for course adoption in a Russian history class.


Special thanks to Deborah Jayne of Tin House Books for this review copy.
Posted by Amy at 10:25 PM