When is multiculturalism a bad thing? Could the answer have anything to do with literature? The new book, New World of Indigenous Resistance, examines this concept in a way that not only fascinates but educates. 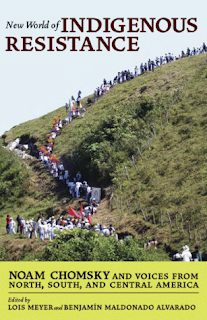 The book focuses on South America’s regions, and has a series of essays discussing issues that face an area largely unknown by those in the U.S. Usually we only hear of earthquakes or small regional clashes that mean nothing to us, but there’s far more to explore. Author and historian Noam Chomsky discusses the essays featured as well as including his own thoughts on the complexities of the region. The South American continent is not simply a mass of Latino culture, but a huge collection of tribes and peoples. What happens there ultimately affects the rest of the world, and outside influences have been hugely detrimental to both the people and the land.

The primary problem faced is one of global corporations and governments arriving to extract resources, reestablish political boundaries, and ultimately combine the people into one more manageable mass. One essay, “Resistance and Cultural Work in Times of War,” by Elsie Rockwell in Mexico discusses the nature of multiculturalism and how it doesn’t benefit the native people at all. For example, international funding promotes a “intercultural” education that lumps all indigenous people into one category, then attempts to teach them in one, streamlined manner. This ignores their personal heritage and virtually eliminates it from the curriculum. Then, in an effort to offer variety under the guise of multiculturalism, they split the students into gifted, ‘special ed’ and ‘migrant’ groups. It is odd that the ‘migrant’ students are actually lifetime residents of the same community where the school is located. Where exactly have they migrated from? Rockwell’s primary assertion against this method is “the current economic order globalizes barbarism: it fabricates poverty, destroys nature, and militarizes other regions.” The one-size-fits-all approach doesn’t respect the distinct differences between the indigenous people, and thus their voice in art, music, and literature is also lost.

Another essay, “Beyond Education”, by Gustavo Esteva in Mexico, examines the attitude of tolerance and its hidden agenda. He discusses how the US prides itself on being a melting pot of cultures, but this melting pot mentality actually just attempts to “to dissolve, each one of the multiple immigrant cultures.” He asserts that the term “salad bowl” would be a more accurate and positive term, one that respects the individual heritage and culture behind native people and promotes such diversity. Thus, the literature and poetry of other places can continue to thrive instead of dying out. As the US gets involved in South America for mining and energy projects, they often use their influence and funds to promote a similar mentality. The problem is, this homogenization of culture also makes it far easier to exploit and manipulate the people within, and the authors of the essays are addressing such concerns.

Chomsky discusses this further in his interview, featured at the end of the book, where he explains that “the demeaning of others translates into subordination internal to the community. So war is the extreme case. You demean and demonize the enemy to the point where you want to destroy him, but you also accept that you are totally controlled at home. You subordinate yourself to your own state to try and destroy the enemy state, while they are subordinating themselves to their state.” This attitude gives great power to a few large nations and the smaller die out. He applies this to literature when he states that “the main themes of the great antiwar novels after the First World War was the idiocy of essentially the same people in the trenches on both sides slaughtering each other, each committed to a power system that was oppressing them.” Thus he concludes that rather than embracing oneness, a healthy respect for the individuals of other places, along with their culture and history, is good for everyone and provides a wealth of experience that enriches what we see and read.


Special thanks to Stacey of City Lights Books for the Review Copy.
Posted by Amy at 10:57 PM