"Say"--he frowned--"does this porridge taste funny to you?"
"Moments before his appearance in the kitchen, I had personally pounded a clutch of wormwood leaves--so renowned for their hallucinogenic properties--into a pulp and scraped their juices into the cereal."
"No," I sad around my teeth as I made a show of swallowing one tiny bite.  "Tastes regular to me." 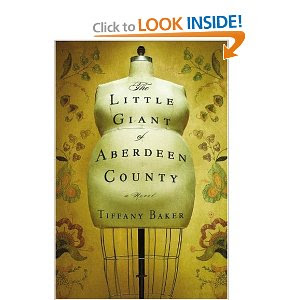 Possessing a pituitary gland gone wild, the large woman known as "Truly" was aware of the unkind remarks, the whispering, and the significant looks from people.  She knew she was an outcast and a source of amusement.  But strangely, it seemed, the larger she grew, the more invisible she became.  When she finds a secret hidden in plain sight, she finds a way to get even with her detractors.

"...some mysteries are too big for one person to hold onto for long, and some are too tantalizing to let lie fallow, and those are the worst kind of all, for they end up being the real heartbreakers.  They are the ones where once you know the story you wish you didn't."

This is a delightful book with an original heroine:  taller than a man, multiple chins, and wearing overalls and men's boots because nothing else fits her.  It is the story of an ugly duckling that never becomes a swan, but is lovable anyway.  And just when you think you have a handle on the story, a plot twist sends you in a different direction.

"But weakness has an insidious side no matter how big you are.  It will creep and slide, wrapping around your ankle like a snake until it's up around your throat, squeezing hard, turning you blue in the face...I didn't say anything at all.  The snake had my tongue."

For her first novel, Tiffany Baker has constructed a tale that weaves life and death, family and friends, hatred and compassion together.  It poses the question, what would you do if a friend was suffering and you had the means to put an end to the pain?  Going further, what would you do if it was an enemy?  This story has a folk tale quality to it, without becoming predictable or cute.  The time period it takes place in, after the sixties, is a reminder of how much society has changed:  from country doctors and one-room schoolhouses and family heritage to newer traditions and replacements for the smaller and quainter aspects of life.  It alternates between sweetness and heartbreak, suspense and resolution.
Posted by Amy at 2:12 PM