A Global Safari with a cast of Trillions 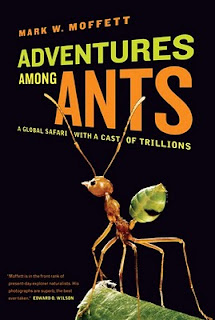 Flat out, this is the most fascinating non-fiction title I’ve read this year. Ants are seldom seen as fascinating, more like a nuisance! However, this book makes me almost wish for an ant invasion, just to try and observe some of the details the Moffett describes in his worldwide studies on ants.

The text contains lots of surprises as it covers various species of ants, and I can’t scratch the surface of all the funny and also disquieting details about these creatures. He first discusses marauder ants, who can be classified in three sizes: the largest is 50 times larger than the smallest, and often serves as a ‘bus’ to carry smaller ants to new locations. Most ants are female, they can live upwards of two years, and their behavior as workers for the colony is altruistic. The worker ants do not reproduce, and thus do not compete for food. In fact, he describes the male ants (that resemble wasps) as ‘socially useless’, and confined to being sperm donors.

Their travel in columns is well-known, but how they find food and relay the information to the workers is unique. They emit a “recruitment” pheromone that immediately tells ants in the vicinity that food is near, and within seconds a full swarm goes into attack mode, retrieving the food and taking it back for storage. But what is more fascinating is the Pharoah ant that also has a “don’t bother” pheromone that it emits when the food is gone, so that no ants waste their time.

The paths that ants use are actually ant roads, they reuse them as needed, rather than just randomly traveling over earth (as it would appear). Some ants have coordinated group attacks that allow them to overcome much larger prey simply by virtue of their large numbers rather than a stinger.  Army ants are useful in some ways because they clear out vermin, such as roaches and mice, from the vicinity. Driver ants can overtake a monkey corpse and reduce it to bone in just a few days. More interesting is that driver ants can play dead, for sufficiently long periods of time to allow them to escape. 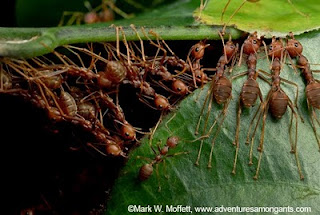 Weaver ants were possibly the most fascinating to me, as they literally sew leaves together (see photo at right). The ants grab a leaf as a team, and another ant picks up a larva (basically a baby ant) that exudes silk and uses the silk as thread to create nests that can last for years. Argentine ants are battling a dangerous war in Southern California, as the colonies actually raise and “herd” aphids. Aphids in oversized numbers then attack local plants. This leads to the death of important indigenous plants that serve to provide pollen to the region, and upwards through the food chain different species are affected by the invasive species.

The writing style is witty and fast-paced. The author’s enthusiasm is contagious, and the details never get too cumbersome or so overly scientific that you end up bored. Great photographs that enlarge the ants to a bigger size make the details that much more fascinating.