Translated from the French by Alison Anderson 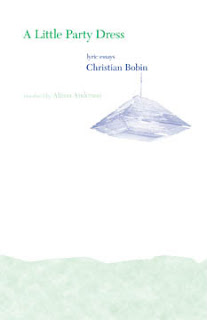 First, I have to admit I didn't know what a lyric essay was, so I had to look it up.  Turns out it has nothing to do with music (LOL), but is rather a sort of hybrid between an essay and a poem.  Then I started reading this book, A Little Party Dress, by Christian Bobin, and I realized there must be a better definition.  In these lyric essays, each section is more like an informal commentary on a theme, without coming across as being a lecture or a self-help book.  The book itself defines it as "meditative prose".

However you define it, it's lovely.  It includes thoughtful reflections on time, books, family, and indirectly, our attitude in life.  Bobin discusses books in many places, such as in "A Story Nobody Wanted":
"The wall between readers and everyone else goes far deeper into the earth, beneath faces.  There are wealthy people who never touch a book.  There are poor people who are consumed by their passion for reading.  Who is rich, and who is poor;  who is dead, and who is living?  Those who never read are a taciturn race.  Objects take the place of words:  cars with leather seats for those who have money, ornaments on doilies for those who don't.  A life without reading is a life one never leaves, a life piled up upon itself, stifled by everything it holds on to...."  He describes the void felt by those who can't look out into another world in books, who are left closed in by their own fences.  Given that he's essentially preaching to the choir, because those reading these essays are obviously readers already, it might seem self-aggrandizing and smug.  It isn't. Instead it reminds the reader to read meditatively and to slow down and enjoy simple pleasures.

In "May He Be Left In Peace", he talks about fatigue and life's constant rush, set in the context of Percival's quest and his ultimate realization:
"Tired people are good at business, they build houses, pursue careers.  To flee their fatigue they do all these things, and in fleeing they sumbit to fatigue.  Their time is lacking in time.  Everything they do more and more of, they do less and less of.  Their lives are lacking in life."

One of my favorites is "Promised Land" where he describes the plight of the 'mass-produced' businessman,  travelling, rushing and controlling:
"In his haste he takes the void with him.  However often he speaks, he hears only himself. However far he goes, he finds only himself.  Whereever he goes he leaves behind a stain of gray; he sleeps in the midst of what he sees.  And so you say to yourself:  these people who travel so much never take a single step forward.  To really see something, you have to be able to touch its opposite...The businessman is merely the latest avatar, the most recent version of the pale man...He is the man with the weakest identity-that of keeping things in their place, that of the eternal lie of living in society."
He contrasts this man with a simpler man, of seeming no importance.  And comparitively reflects on the meaningfulness of each in a way that isn't dismissive but insightful.

The translator, Alison Anderson, describes Bobin's work: "He’s not edgy, or trendy, or experimental; he’s deeply reflective, almost religious. Maybe people aren’t used to thinking about life in a philosophical way, at least not through literature."  (from Scott Esposito at Two Words: Center for the Art of Translation at http://catranslation.org/blog/2010/03/01/a-writer-called-christian-bobin/)

Of everything I've read this past year, this is one I think I will return to, enjoying the short essays and the honest style of the prose.  The author writes in such a beautiful way, it's almost as if this review needs a special font to illustrate it.  Their is no arrogance in the writing, even though it points at many of the flaws in modern life.


Special thanks to Russell Valentino of Autumn Hill Books for the Review Copy.
Posted by Amy at 2:04 PM