Winner of the 2010 Pulitzer Prize 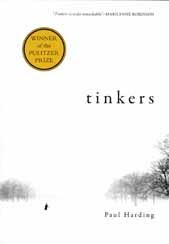 Maybe it’s the lower-case small font and nearly colorless cover of this novel that had me thinking that this was a quiet novel. I imagined it being somewhat quaint and simple, and began reading it with that in mind. The cover is possibly the only simple thing about this unique and lovely book. There are many threads throughout it:  fatherhood, family, and the passage of time being foremost. But the mysterious elements of regret, personality, and love also wind through delicately. It’s complicated without being overwrought or maudlin.

The first half of the book is a sort of parallel account of father and son, each from their perspectives and in their own voices. Howard, the father, is an epileptic who travels the countryside selling his wares. He watches over his family as best he can, with a particular fascination for his oldest son. At one point, his son runs away:

“There was a moment of sorrow, disappointment, and deep love for his son, whom he at that second wished had had a chance of real escape…I just wish that you had made it beyond the bounds of this cold little radius…”

George, his son, enters the story as an elderly man, in the week preceding his death, hallucinating about his life, his childhood, and his love for clocks. The thoughts alternate from one character to the other, but in real life they seldom had a conversation. Clearly, though, they were on each other’s mind. Details of their work, always involving small and seeming insignificant parts that lead to a complex whole, fill the narrative.

A change occurs though, in the middle of the book, that is ominous and painful and takes the story into a new direction. Suddenly the visual images change from small metal workings to descriptions of light, water, and landscapes. In this portion, the reader goes back further to Howard’s father, whose own mysterious existence now becomes the focus of Howard in his later years. The flashbacks are not confusing in this context, as happens in some novels, because the tightly woven threads of the narrative keep you in place. There’s almost a haunting feeling as you near the end, as you realize the implication of the events in the story.

“A move of the head, a step to the left or right, and we change from wise, decent, loyal people to conceited fools? Light changes, our eyes blink and see the world from the slightest difference of perspective and our place in it has changed infinitely…”

Harding describes his characters beautifully: full of contradictions, flawed, sometimes foolish, and yet often hopeful. At the same time, he describes one with a particular sort of rage and hatred that is masked by indifference. The contrast is chilling. This is by no means a suspense novel, but trying to understand the motives of some characters creates a sense of apprehension. An acknowledgement of the relics we carry, both literal and emotional, plays into the personal impact of the story.

Some moments are unimaginably painful, and yet real: the family gathered before George’s death turns off all his ticking clocks, his life’s collection, because the sound is annoying to them. While he, in his semi-conscious state, realizes that without the ticking, time has essentially stopped, and his suffering is worsened with the loss. Little details like this mean you need to keep the Kleenex handy. And be prepared for after you finish this book: you’ll want to hug your Dad.  Often.
Posted by Amy at 10:40 PM