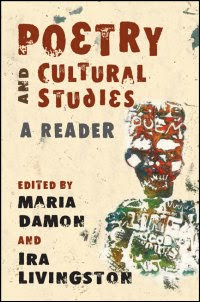 First off, an admission: I have not yet “completed” this title. I’ve read through all of it, but it’s a book more designed for study than for simply reading. It has an almost textbook style to it and I’ve got so much out of it I don’t intend to shelve it and move on. I want to continue going through the chapters as the concept of combining poetry with cultural studies is much deeper than one would expect.


For example, in high school and college a certain amount of poetry is covered in English, but admitting you like poetry at that age is akin to outing your inner nerd. Only a few could get away with it and still be cool (Keith, AG, Class of ’84: you did it…you were still the coolest!). Then, as we age, reading or writing poetry is often a way that some identify a snob or someone with too much time on their hands. If you say that you are writing a book, you can maintain some respect and a bit of eccentricity. Say that you are writing a poem and you get looked at askance, at least in my corner of the world.

Then there’s the problem of identifying “quality” poetry: there’s an attitude about high-brow poems that if you have to ask what it means, you are surely too dense to get it anyway (and I freely admit I am too dense to get some of the more abstract types). Some of the more famous poets get written off as if, by becoming commercially successful, they’re less important. Then there’s a few of the edgier poets whose content is so filled with obscenities and graphic depictions that you simply end up confused at their purpose (one title, which shall remain nameless, was sent to me to review, and every single poem had a penis somewhere in the verse, I kid you not!). The variety of work is incredible as are the techniques, and I freely admit to enjoying most of it. Billy Collins, Kay Ryan, Scott Wannberg, Alex Boyd, Richard Wilbur, and Susan Rich are some of my favorites. Manolis is new to me and I’m enjoying his work is well.

That’s where this title, Poetry and Cultural Studies: A Reader comes into play. The premise is simple: culture creates a poetic voice, and varying cultures generate different styles, subjects, and emotional responses. The most obvious reference is to rap music lyrics, and how the culture of black society in the US created this form of expression. However, editors Maria Damon and Ira Livingston did a far more thorough study. For example, Nicaragua is discussed in Bruce Campbell’s essay “Assembly Poetics in the Global Economy”, and he relays how the culture there actually promotes poetic expression: “The Sandinista revolution (1979-90) distinguished Nicaragua as the first nation for which poetry and sweeping social, economic, and political change were closely identified. There were poetry workshops designed to create readers and writes of poetry…Famously, ‘a nation of poets’ was declared, pronounced, spoken, read into being in the 1980s.” He goes on to show how even after the Sandinistas no longer were in charge (during their leadership literacy rates increased dramatically), poetry is commonly found in newspapers and is a constant feature of Nicaraguan life. He goes on to explain the signs and convergence of globalization on regional poetry.

Are there complications to the advance of poetry in a literate society? Trinh T. Minh-ha points out in the essay, “Poetry and Anthropology”, that “poetic language could therefore be a process that destabilizes institutionalized ways of writing, [and] …unsettles the identity of meaning and speaking subject.” And speaking to the unique styles of poetry, “it engages meaning in all its subtleties and prevents it from ending with what is written and said.” In other words, the study of literature and poetry do not necessarily mesh because one invites interpretation and the other could have multiple meanings, and understanding poetry is often dependent on cultural motifs, clues, and authorship.

In Audre Lorde’s essay “Poetry is Not a Luxury” she speaks to how allowing our creative voice to speak and refers to poetry “as illumination”: “It is through poetry that we give name to those ideas which are-until the poem-nameless and formless, about to be birthed, but already felt.” She encourages self-expression because “each one of us holds an incredible reserve of creativity and power, of unexamined and unrecorded emotion and feeling.” Her essay examines all the possibilities of such freedom and birth of thought, both for a poet and for a reader of poetry. She concludes with “there are no new ideas. There are only new ways of making them felt…”

This collection was published by the University of Illinois Press and could be considered the definitive standard for understanding the differences in styles, regions, and importance of a variety of poetry styles.


Special thanks to Michael Roux of the University of Illinois Press for the Review Copy.
Posted by Amy at 3:54 PM