No Way Down, Graham Bowley (nonfiction) 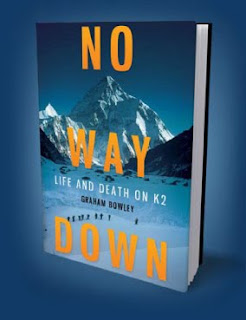 "Above the Bottleneck was the serac-the blunt overhanging end of a hanging glacier-a shimmering, tottering wave frozen as it crashed over the moutainside, a suspended ice mountain six hundred feet tall...and about half a mile long.  It was smooth in places but large parts of it were pitted with cracks and crevasses....This was the way to the summit."

Journalist Graham Bowley created an intense narrative of the infamous tragedy on K2 in 2008 in this new release No Way Down.  Despite being smaller than Mt. Everest, at 28,251 feet, K2 is reputed to be the most terrifying to climb.  Twenty-seven members of eight international teams progressed from Base Camp One to Base Camp Four as their bodies adjusted to the increasing lack of oxygen.  Then, on a beautiful clear morning they began their final ascent on K2, in a planned order that the groups had agreed upon.  They planned to reach the summit and plant their national flags, document the excitement with photographs, and return to Base Camp Four, all by nightfall.  No one wanted to be on the mountain after dark.

Then everything went wrong.  A series of bad decisions and unexpected events changed the plan, resulting in the loss of eleven lives, as well as lifelong injuries for two more.  Some climbers had to spend the night on the frightening mountain, hanging on lines and wondering what the morning would bring.

This is not a simple disaster story, and there is no happy ending.  What is unique is that while Bowley wasn't there, he was able to interview most of the members of the various teams, getting insight on what they were feeling and how they addressed proceeding through disaster.  Additionally, he interviewed families of the survivors and those who died, getting their impressions and insight.  This creates a fast paced read that isn't simply one eyewitness account but rather than unbiased compilation of many voices, a fuller picture that demonstrates both the power of nature and the desire of man to conquer it.  Reading it exposes more than just the climb, it explores the personalities and reasons why some choose to explore such danger.Half-way through the book is a photo section that would have been better placed at the front, just to put a name with faces.  Seeing the photos made the tragedy more personal.  Included is a group picture at Base Camp Four who were determined to ascend the following day.

"They had broken out of comfortable lives to venture to a place few of us would dare go in our lives.  they had confronted their mortality, immediately and up close."

Reading this makes you shiver from the cold and the suspense, even if you know the ending.  This would be a great summer read, just for the chilling effect it would have on a hot day!  It'll make you ponder the whole concept of how you identify 'adventure'.


Special thanks to Gretchen Crary of Harper Collins for the Review Copy.
Posted by Amy at 12:38 PM