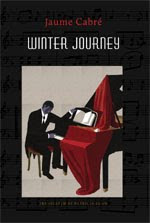 This collection of short stories from Jaume Cabre is his first to be translated into English. Cabre is a Catalan author, teacher, and philologist. What is a philologist? Hopefully I’m not the only clueless one out there! A philologist is someone who studies the historical development of languages and literature. This aptitude for linguistics is especially apparent in Winter Journey in the way Cabre expresses dialogue, illustrates a character's inner thoughts, and describes influential details in different scenes.

The short stories vary a great deal, but a common thread in many is music, both composition and performance. Many of the characters deal with problems that occur in their lives in the most unpredictable ways. Cabre reveals his characters, even the most flawed ones, with a thread of humor and care. It is as if he is acknowledging that they are flawed but that they still have value.

My favorite was “With Hope in His Hands”, about a father enduring a long-term prison sentence with no word from his only child. He spends his days agonizing over why she hasn’t written him a letter in all the time he’s been incarcerated. He wonders if she’s ashamed of him, how her health is, and even if she’s still alive. His worry leads him to plot an escape plan, with the sole intention of seeing her again, just once. Despite various setbacks, he keeps planning, and finally, the moment arrives for him to escape. But just as dramatically, he is given the answer to all his questions, and he chooses to remain in prison. It’s not despair but joy that makes him stay. The way the story unfolds, with flashbacks as well as details of the prison, feels incredibly real.

Another is “Dust”, about a young woman hired to clean the spectacularly huge library of an aging book collector. She spends her days in the various genres, sometimes in ORIENTAL POETRY, other times caring for TRAVEL BOOKS, EUROPE. She imagines the value that all of the books must have, and assigns a similar awe-struck value to their collector. After some time in his employ, she questions him about the books and how important they must be. His response is that “I’m searching for wisdom…Because wisdom is shy and it likes to throw up smokescreens so people will leave it in peace. I pursue the unknown wisdom that always hides […] In apparent mediocrity.” He then, to her shock, explains to her that his collection is pretty much the worst of the worst: terrible poetry and hideous novels. The twist is there and it packs a punch, but Cabre pursues it even further, revealing the reason why the collector keeps the vast works at hand. 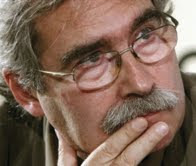 Each of the short stories features some sort of distortion of expectation in one way or another, but they never get gimmicky. Towards the end of the collection, a story called “Winterreise” re-introduces us to two characters from the very first story. Cabre doesn’t just deepen the previous storyline, but he takes it into a new direction with unexpected details that weren’t evident before. It changes everything, and creates an entirely new storyline that is painful, ironic, and a tiny bit funny.


Special thanks to Melinda Kennedy and
David Rade of Swan Isle Press for the Review Copy.
Posted by Amy at 6:34 PM