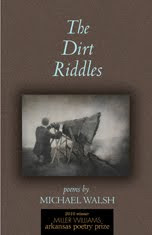 The Dirt Riddles is a sober and quiet reflection on rural life, composed by Michael Walsh.   The poems highlight many of the themes of agrarian life:  the constant attendance to the sky, the soil, and the wind as well as the more routine chores of keeping the home place in order.  There is a solitary feel to the poems, a reflection on the inner mood rather than the outside.  In fact, reading these feels like eavesdropping...hearing a quiet voice observe and evaluate their surroundings unsuppressed by inhibitions.  And yet, these aren't sullen or gloomy either.  The introspective voice is aware, calm, and natural.  There are no awkward metaphors or complicated allusions.  The simplicity is deceiving.

From the larger animals down to insects, Walsh shows an acuity to every detail.  No living thing escapes his notice, and even inanimate objects merit interest.  Things we consider traditionally beautiful may be mentioned, but it is Walsh's ability to note the beauty of rust, electricity, wind, gravel dust, even the rot in the core of an apple that make this collection unusual.

With very few words, Walsh describes different facets of a father figure, one who is rigid and angry, yet runs into a burning house to save his childhood comic books. In "Paper Flesh" he describes him:

He couldn't leave these stacks behind.
But the bright covers were already half-cooked,
dark as negatives, heroes and villains
singed indistinguishable.

One favorite, still on the father theme, was "After his lessons from the belt":

my mother would always sit on the bed
and spread out the great map
of his fault lines - that webwork
of unpredictable tensions.
We studied where the quakes
were most likely to occur:  in barns, fields,
near sheds.
We learned to sense the shifting,
the slow grind of plates, the opening
chasms of his hands.

If you sprint fast enough,
the corn runs with you,
whole rows quick on their roots.

Slow down and they jog
calm and breathless.
Stop and they turn

to walls.  Hands on knees,
you pant, and all the leaves,
like wings, beat wildly.

It's the attention to simple details and the juxtaposition of unusual elements that makes this collection really enjoyable, even relaxing, to read.  Without getting maudlin or political, there's a sense of how the increasing loss of the farming life and the family farm in our lifetimes has left a void in our consciousness in the last century.


Special thanks to Thomas Lavoie of the University of Arkansas Press for this review copy.
Posted by Amy at 1:25 PM