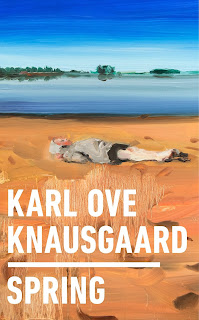 Survival mode, a day at a time

{Disclosure: Depression is the major theme of this book and one that should never been minimized, stigmatized, or joked about. My review is not intended to make light of the subject, I suffer from PTSD and GAD myself. However, I've found humor, even the dark dry stuff one seldom owns up to, is THE survival skill. So hearing him describe the crises (many) without hearing sarcasm, self-pity, or a simple "piss off" feels unreal. Surviving decades of depression defies review, but the most vital key for me has been some form of humor. Read his book for his personal and painful explorations of family ties amid disaster, the pain suffered by loved ones of the depressed, and the adoration of a father for his children.]

Things I learned in Spring.
1. Karl is a very careful driver.
2. He is a very keen parent.
3. Karl makes up part of the 1%.
4. Karl's children are perfect.
5. Karl backs up his vehicle carefully at all times.
6. His family eats out often.
7. Despite his claim to writing, he appears to hang out at Gymboree, as he's obsessed with cute baby clothes.
8. If you ever have a secret to tell, do not tell Karl.
9. Karl likes to ruminate on countless subjects.
10. He ruminates when he drives carefully.
11. Karl pretends his children only watch 1 hour of tv per night.
12. Karl frequently washes dishes.
13. Karl doesn't give a damn what anyone thinks of him, except for his children and the assumption he is        not tidy.
14. Karl folds laundry into piles and sorts them. Dry laundry.
15. Karl dries the laundry first, after he does the dishes.
16. Karl dislikes pants.
17. Slobs (not him) can be stylish if endowed with a scarf tied properly, he feels.
18. Karl spends time in gardens, by plants, wherever he is. Looking at flowers. Feels things.
19. He likely would prop an azalea in the front seat, with seat belt, if it wouldn't cause a fuss.
20. Karl's face gets him money at foreign banks.
21. Karl's perfect children rarely argue.
22. Karl's family has all the pieces and the instructions sheet for a badminton set.
23. They play badminton. Often.
24. Karl is washing up the dishes again.
25. The wanker still smokes. It's when he feels.
26. The careful drive to Molma is lovely. Lots of feelings here.
27. Karl loves his family.
28. Karl's children are charming in a surreal way.
29. Karl seems tireless; is acknowledging a nap a crime?
30. Karl is loyal.
31. Karl wants you to know he's listening to Queens of the Stone Age.
32. Karl uses a radio. Still. Useful when drying up.
33. Karl drives so carefully he claims to see around corners in the villages.
34. Karl is not likely to adhere to HIPPA guidelines.
35. Karl would be interesting to eat a meal with. He'd either say nothing or talk the entire time. There is no in-between. It would be interesting either way.

See, at first I was taken aback of how he discloses subject matter so personal to another. Yet, I recall My Struggle (the series of them) did that very same thing. So after the shock, I was then sort of mentally dissing him because he cleans up good, too good, in his descriptions. He seems patient, reasonable, indefatigable, cheerful, a healthy eater (despite the smokes), and pretty much A-Ok. He actually doesn't describe anyone in less than affectionate terms. That bugged me. The Realist in me was muttering, "or so you say," over and over.

But then it clicked. It was a gift to his daughter, a memoir of a time, a day, that cannot be easily explained. It was a recreation of history. Why muss it up with tantrums, impatient driving (he's careful, you know), the ugly moods of kids, the self-loathing and constant analysis of past misfortune and current fame? Why NOT make it really lovely, like a postcard from a trip that was terrible but that you wished was better? Does it matter? Given the subject matter, I totally realize the brilliance of this move by Karl. Because he's not writing for the world, he's writing for her. This so that she doesn't have to grow up to only go back to long careful drives with the music on while ruminating on her origin story. She will anyway, but this should soften the blow. Because the pure parental love is there, not just by caregiving but by genuine affection. Like, he's choosing this life and that it wasn't bad luck.

One thing I really liked was how he relays to the reader how much time he spends talking to that voice in his head, and that he was in his teens before he figured out everyone had that begrudging, nasty, repulsive voice in their heads. I immediately thought of how I was quite old before I realized it too, like in my 30s. I just felt like I had a helpful but bad angel on one shoulder constantly crapping on my life. Then I read Diego da Silva's novel, I Hadn't Understood, and his fictional character (one of the most beloved of my reading life) is constantly arguing with that voice. And it was freedom. Now I could tell that voice to bugger off (or try to) because it was universal. How did I get so old without knowing the universal truth that we are all wondering about something and it's never, "how could I do that less well, next time?" Da Silva's novel, FYI, is amazing. Totally different vibe than this; this is far more serious and da Silva's guy was just a lovely idiot.

In all, I can't say I enjoyed the book. I would recommend it, but reading each page was more suspenseful than Hitchcock and all that suspense is tiring, and I felt it was somewhat manipulative on Karl's part. I will likely read Summer.
Posted by Amy at 5:27 PM No comments: