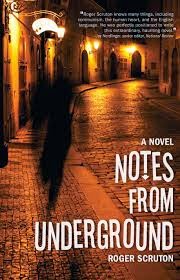 "...attempts at difference had the opposite effect to the one intended. For they emphasized that, in the midst of this randomness, you saw only the one identical expression: eyes staring into the distance, and lips held firmly shut as though against some pervasive infection Our people had collectively solved their shared problem, which was how to keep the mask in place, while showing that it is only a mask. People collaborated in the great deception, so as not to be deceived."

Scruton's book examines Prague life under the unrelenting pressure of communism, and it's desire to create sameness and eradicate personal opinions and choices.  Seen most in the world of literature, where writers were commonly arrested and jailed, sometimes executed, the lack of freedom of expression was so controlled as to prevent personal thoughts.  Just the idea of waving at someone insinuated a further connection, a nefarious plan under way.

The police were calculating and cold in their efforts to cool any uprisings by suppressing everything written, even harmless works of literature. In result, much more harmful (to Communism at least) works were perpetrated in secret in opposition to the force of evil. Dissident authors and writers wrote secretly, as their work (or even having it in possession) could land them into jail.  But they did not quit, and if anything, while its exposure may have been limited to the literary few, it probably saved them mentally.

The novel begins with a woman being arrested who was secretly known for copying dissident works into books. Her son involved, she takes all the blame and is jailed. Lost for what to do, he himself a writer as well, wanders the underground (both literally and figuratively) trying to figure out what to do.  Soon he meets an attractive woman who leads him on a path to produce his literature but with a theory: become famous in the outside world so much that Czech officials can't touch him without political repercussions.

But who is she, and what is her intentions?

"A curious thought entered my mind: that she had quite separate lives. The thought no sooner occurred than it became a knife of jealousy.  The girl who cultivated dissidents, what was exploring the world of the samizdat, who was in some strange way excited by the opportunity to recreate me as a hero and a martyr, was the holiday version of another being entirely."

Filled with beautiful and nuanced sentences, the novel contrasts the barbaric stomping out of words with the subtlety and pleasure of well-written prose. The author contrasts these so clearly that one can't help but feel the tension between the political forces at play and the hearts behind the written word.  It's not idealistic, some of the samizdat writers were jerks too, not to be trusted and often arrogant.  But their opposition, in whole, to the entire movement to destroy them only makes them more fascinating.

Scruton's writing is unusual.  A narrator who thinks wisely and yet makes naive assumptions, who loves and yet distrusts; a complicated man in every sense.


Advance review copy provided by Amazon.
Posted by Amy at 7:53 PM No comments: