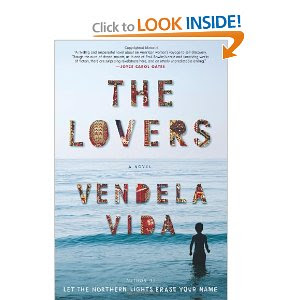 The Lovers is a novel set in Turkey, where a newly widowed woman returns to the place of her honeymoon, almost three decades before.  She's trying to escape her life in Vermont, and her new status as the pitied single woman among couples.  As the mother of grown twins, she is conflicted with her memories of her marriage and her relationship with her children.  She's discovering that as more time passes since her husband's death, the more she is forced to re-evaluate their relationship.

After describing lush and green Vermont, the description of Turkey provides a stark contrast with dust, stones, and volcanic mountains.  It's a none-too-subtle hint that with a new setting in place, things are going to change.  But are they?  This is where the novel makes a twist:  nothing you think is going to happen actually happens.  Once in place, she craves the company of others, so much so that she puts up with the imposition of others just to have human contact.  Eventually, this leads her to a realization about her own personality and her own future.

To be sure, this is not a romantic or happily-ever-after "chick" lit story. It is not Eat Love Pray, and there's no glamour, sudden insight, or handsome distraction.  Rather, Yvonne, is very much alone and really has no basis to understand who she was, or is.  If she's different, then it means her perceptions of her husband and children are altered too, and that's where her story becomes less typical and more interesting.  In fact, the title "The Lovers" is misleading...it's not easy to determine who that would describe.

It doesn't take long for her to realize she's been playing a role, but she has no other script to turn to...she doesn't quite know how to behave anymore.  I don't want to reveal any spoilers, but as the plot continues, she is so disoriented that her decisions become riskier and more dangerous.  Rather than feature shocking revelations or dramatic confrontations, the novel proceeds to a realistic conclusion.  Rather than settle for a shallow resolution, the novel leaves you to ponder deeper complexities of personality and self.

The story is fast paced, and as a main character, Yvonne is solid.  But her children remain a mystery, and it's hard to grasp how they fit in with it all.  Additionally, in the beginning there are hints as to the direction of the story that are misleading, and really weren't necessary at all.  The book didn't need those elements to mystify us, her story alone is strong enough without them.  And while the main character is female, the appeal of the plot isn't limited to a female audience.

There was one seeming discrepancy: this sheltered woman has put herself in a foreign country, alone, without even a guidebook to the language.  She is suspicious at times of others, and rightfully so, as malice is present, and yet she makes no great attempt to lock up her vacation rental or show any sense of caution in her actions. She's throwing euros around as tips, and everyone seems to know she's alone.   Unexpected visitors, with their own keys, seem to pop up constantly, and yet she takes it all in stride.  That seemed a bit out of character from how she was described, but it's a small complaint.


Special thanks to Ecco Books, a Harper Collins imprint, for the Advanced Review Copy.
Posted by Amy at 9:28 PM