Love & Partnership with a Search-and-Rescue Dog


“’You couldn’t pay me to do that’…she said, gesturing to the brochures and photographs we had…When I told her that we are an all-volunteer group, she gave me a little laugh and a doubtful twist of her head, and said, ‘You do this for fun?’” 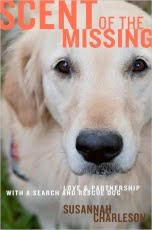 Dog lovers will revel in this true story of a young woman who, after a career piloting her plane for law enforcement searches, makes the jump to a field assistant for canine search-and-rescue teams on the ground. Eventually she qualifies to train her own dog, a Golden Retriever named Puzzle, who emerges into a highly trained partner. They learn to read signs in the field and understand each other’s signals to accomplish work that can save lives and solve crimes.

Dogs have forty times more scent receptors than humans and most of us cannot appreciate how a dog can trail a missing person. Because of this, skeptics abound even among law enforcement personnel. However, those who work with specially trained dogs in other fields, such as bomb and drug detection know the abilities of these specially trained dogs. Some dogs are can be trained to sense seizures approaching in epileptics or cancer in medical patients. A variety of classifications is explained in this text that shows the fascinating possibilities, many yet to be explored. Some dogs, like Puzzle, are trained to accept a pack and rappel line and are lowered down steep cliffs, literally hanging on a wire, while remaining calm and eager to continue their search.

“Air-scent dogs are frequently used…to find living victims. Trained to locate and follow the cloud of human scent made by the microscopic skin rafts we shed and odors we create just in the process of living… Tracking dogs, sometimes called a cold-scent dog, may follow both the scent in the air and scent that has fallen into foliage, objects, cement, or dirt in trail and can follow a path that is days or weeks old…”


“Cadaver dogs specifically recover deceased humans and locate skin, hair, bones, blood, and the indeterminate mix of scents made of semen, urine, sweat and the process of decomposition which has an evolving scent of its own.”

One of the most fascinating types of search canine is one classified as a HRD, a Human Remains Detection dog, who “may alert over graves from a century before. One of the most remarkable possibilities with a HRD dog occurs when humans are buried near the root structures of trees. HRD dogs may put up their paws and stretch to alert on the relevant tree, which exudes human scent as part of its photosynthesis and related processes.”

Besides participating in searches for Alzheimer patients and campers who become lost or wander off, crime victims, or those who have drowned, Susannah has also participated in the recovery of human remains from the space shuttle Columbia’s disaster. Dogs have been used in the recovery at Ground Zero, in tornado-ravaged country sides, and the 1995 bombing in Oklahoma City. The photo section in the center is moving, as many of the dogs discussed are shown, some with the people they saved. One picture that is especially touching is that of Skip Fernandez, a search-and-rescue handler, sleeping against a wall after working all night in the rubble of the Murrah Federal Building in Oklahoma City. While he rests, his Golden Retriever is on his lap, still on duty protecting him.

This was an amazing read, especially in revealing the skills of animals that we often take for granted.  As my Doberman sits on my lap snoring, I can hardly imagine her doing anything particularly useful, much less lifesaving!  One caveat:  some of the writing style felt a bit strained, with sentence fragments and punctuation missing in places.  Initially these were a distraction, but as the book proceeds they were less noticeable.  The amazing on-the-scene details took over, and it became the kind of book you want to share with others, especially dog lovers!


Special thanks to Julie Harabedian of FSB Associates for the Review Copy.
Posted by Amy at 2:44 PM