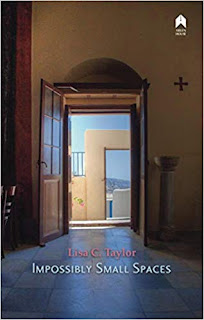 “...it isn’t fair that one species can exploit another and that sometimes even when I want to, I can’t protect those who need it most”.

A universal sentiment to be sure, but the angle Lisa C. Taylor takes in this collection of short stories is defining who most needs that protection.  Stepping back from a more traditional world view, Taylor demonstrates in Impossibly Small Spaces that it is a tiny corner of our most private self that is most at risk.  How that secret self gets protected, and what defines safety, is the core of the stories that take a fresh perspective on what we do when the unpredictable occurs.

I had read her previous book, Growing a New Tail, a few years ago. I was knocked out by how she painted characters in absolutely ordinary situations who dealt with both the mundane and the ugly in their own unique way. The flip side to this new collection is that it is the situations that are nothing ordinary, and the character reactions are complicated.  Self-preservation by denial and running from grief is a tactic these characters find necessary. They aren’t making grand gestures of expansive good works to society. Rather, they are in survival mode, which can take many forms, some of which are no good at all.

In one story, two strangers awaiting a plane arrival briefly acknowledge each other before the worst news crashes in on them. They don’t react as if in a Hallmark happy-ending movie plot.  Their next actions are spontaneous, slightly insane, poorly thought out, and terribly real.  It’s that kick of the reality of what they do that drives many of the stories:  no one prepares us for crisis, so no one can say we are doing it wrong.

Many of the stories have the basis of strangers in pairs trying to navigate a crisis. One woman needs a date for a wedding, but finds that getting one means revealing her most fragile secret. Another character creates secrets to hide his own reality, but loses himself so deeply in falsehoods that nothing is real for him anymore.

In a moment of self-reflection, he considers a fish tank: “Did [the fish] have the consciousness to know he was in a prison or did every body of water feel the same?”  The reader senses that the alternate reality he’s created is probably more prison than safety, even though he has no intention of escape.

Throughout the stories, which stand alone and are not linked, Taylor’s insightful character studies mean they are not easily forgotten.  Weeks after I first read it, I remembered certain characters with a sort of wistful, “what if” thought as to their survival skill. It was as if I’d read a newspaper article about real people.

“A life with this much colour requires a mute button.”  That mute button is the key to finding the impossibly small spaces that let us survive whatever happens. Taylor’s stories are rich and complex, and entirely unforgettable.