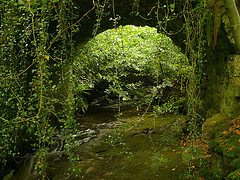 Still unused,
the letter opener
she got on her birthday
has become tarnished.

It lies on the sill,
next to a seashell
she found in Florida
before moving west.

Her son wants to use it as a dagger,
to wield it savagelyagainst monsters and bad guys
that come streaming out
from the toy-cluttered corners of his room,
but he can't reach it yet.

Shape of My Heart, lyrics by Sting

Those who speak know nothing
And find out to their cost
Like those who curse their luck in too many places
And those who fear are lost
Posted by Amy at 12:50 AM No comments:

Just finished this last week, definitely a must read. No spoilers, but if you read it, stop and consider what details hit you as significant and what seem irrelevant, then as you read it, see if you are correct.


If you are the type to read the blurb on the dust jacket (I'm surprised to find many people don't), don't get too caught up in thinking you can imagine what will happen.


The most surprising thing to me is that this is one novel where much of the foreshadowing details aren't explained, and details that seemed to precipitate something big are misleading. Usually that ends up feeling disappointing or confusing. In this book, it doesn't. It fits. It makes sense in this meandering, fairy tale style, little orphan boy, Lassie saves the day sort of way.


The characters are pretty brisk. Trudy and Gar both seem extremely complicated, but it's only by inference, not by any internal monologue that you have to plod through. They are described fairly briefly but you can sense how they've been shaped. No wasted dialogue to have to figure them out. Edgar himself is amazing, and you don't for a second feel sorry for him like another author might want you to. Almondine, a main character in her own right, knows only loyalty and desires to protect. Imaginary to think a dog could ponder protecting it's family, but we do have guard dogs, right?


The book is lush, beautiful, and is probably going to be a movie soon. I tried to mentally cast the characters and could only come up with Chris Cooper as Claude, Steve Buscemi as Henry, Kodi Smit-McPhee as Edgar, and David Morse as Glen. Trudy seems like she could be Laura Linney but maybe not as pretty? I can't find anyone for Gar, as yet. He has to resemble Chris Cooper a great deal, but I hate those movies when one guy plays two roles. Alas, no role for Viggo.

My only irritation with the book, as with myself, is it gets too wordy at times. Sometimes you want to say to the author, 'okay, so we know you own a thesaurus...yay'. He definitely puts that book to good use, I had to look up a million words and by the end of the book realized they all described pretty much the same thing, only so much more elegant.
Posted by Amy at 4:42 PM No comments:

Too young for Alzheimer's,
too old to have a note on a string around my neck.
I go through the movements of my day slowly,
trying to give time for the errant thought to find it's way back.

Nodding to myself occasionally,
as just a shiny glance of the thought
Flutters into my head

Something I needed to do,
something that was important
Something urgent

And then like the scent of the faintest gardenia,
the thought passes.
I try again.
I move in jerky pauses,
sure that the thought is just out of my grasp
and if I hold still enough it will land like a monarch

Worrying if it's something so important that I'm doomed
If I can't catch it.
The day passes slowly
the thought flitters and never lands.
Posted by Amy at 11:04 PM No comments:

"There is nothing like being left alone again,
to walk peacefully with oneself in the woods.
To boil one's coffee and fill one's pipe,
and to think idly and slowly as one does it."