You Lost Me There, Rosecrans Baldwin 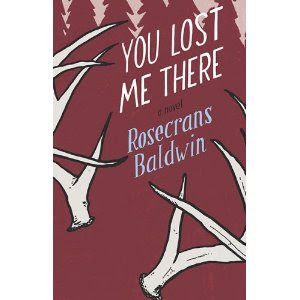 How often do you run into Mr. Willis and his oeuvre in literary fiction? He may not appear frequently (maybe not at all) yet he fits in perfectly with this substantial and insightful novel about memor by Rosecrans Baldwin. You Lost Me There is a complicated story, with twists and surprises and feinted paths, as well as scientific details about disease and the research to fight it. Beyond the serious details, it is a fun novel as well, thus Bruce Willis references prevail throughout the story and with surprising relevancy.


“Years in the past, someone thought my wife was a knockout, one night long ago in a restaurant. A night I didn’t remember.”

So realizes Victor Aaron, a brilliant scientist who is now realizing just how ignorant he’s been. In the time since his wife’s fatal car accident, he’s been lost and unable to find his way, too young to retire but too old to feel any real enthusiasm for his life or work. As a scientist researching Alzheimer’s disease, he’s enthralled with the concept of memory and works to find a cure. His work gives him opportunities to study case histories on how the brain is wired, and the novel doesn’t hesitate to dip into scientific explanations. That the memory specialist is unable to recall much about his wife, anything accurate, is a puzzle he needs to solve.

He stumbles upon note cards that his wife had written, as suggested by a marriage counselor they had hired, in an effort to stall what appeared to be an inevitable divorce. Their marriage had become a quiet battle of pathos versus logos, with a bit of ethos thrown in by crazy Aunt Betsy. Aunt Betsy appears to be the voice of balance in the novel, even though she is described by Victor as “an amateur anthropologist… [who] studied misbehavior. She tracked her stories doggedly and did not hesitate to use them.”

Victor is most astonished by how his wife Sara describes him in her note cards: “He was so focused on research and making a name for himself that we were landlocked by his lab schedule, him at sea and me in the window.” She had a successful career, as did he, they were wealthy, and he didn’t see a problem in their marriage that couldn’t be fixed without him simply apologizing. That his apologies were vague and noncommittal didn’t occur to him, and as he continues to read her notes he realizes how differently he and she had interpreted significant events in their lives.

However, the story doesn’t limit itself to their marital discord, which would probably be a really sappy novel that would ultimately be a bore, and then a television movie. Instead, Baldwin goes deeper into what memories Victor has, from a childhood friend’s suicide to his closest friend’s obvious creepiness. It’s as if seeing his wife Sara’s version of himself has freed him to reexamine himself from other angles. Yet you can’t be lulled into thinking this is a fable that ends with everyone awakened to their flaws and eager to change.  Can you change who you are if you can't remember what you've been?

“I didn’t want to remember that evening ever again. Wipe the synapses clean with some scotch and a hard sleep.”

Baldwin creates a thriller-like pace, and he weaves in details such as the “We Will Never Forget” bumper stickers of 9/11, and how in placing them on cars, people are essentially admitting that they need to be reminded. Victor admits to not remembering the name of a movie that was the centerpiece of their first date, and Baldwin uses this to contrast how there are often so many little things we remember while the more important details slip away.  Even more fascinating, though, is how Baldwin portrays different characters in the phases of wanting to remember or trying to forget.

Because this doesn’t attempt to sew up all the details neatly, it would probably be a great film. I’d bet the movie rights are already sold. The question is, is there a role for Bruce Willis?


Special thanks to Riverhead Books for the Review Copy.  It releases in stores today (Thursday).
Posted by Amy at 10:16 PM