“yet something lurks in the diaphaneity of glass”----from "Mirror" 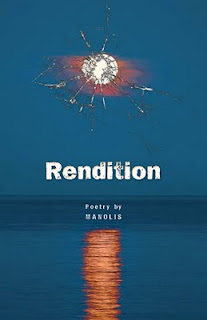 Glass is not necessarily clear, just as a mirror doesn’t always reflect reality. In Rendition, the poet Manolis reveals layers of meaning that appear as elusive as a shadow on a broken shard of glass. Quotes from Federico Garcia Lorca and T.S. Eliot preface the segments of the book, and there is a sense of warning given throughout to the reader to focus on the present instead of being immersed in the past or in rehearsal for the future. As always, the language is picturesque, and Manolis describes inner thoughts and outer dialogue in a way that shows the battle between the two, especially in “Tolling Bell”, where grief is disturbed by the necessity of trivial funeral preparations.

Biblical allusions abound in this collection: most memorably in “Unexplainable,”

Hop to mess of potato chips
you threw…


The endless is not more
secret than the finite

It takes two sparrows
and a potato chip

His words recall the verses in Matthew 10 where Jesus mentions two sparrows of small value, and then relays that ‘you are worth more than many sparrows’. Just as the seemingly worthless potato chips sustain the birds, the poet reminds the reader of nourishment for the soul.

In "Elegy II", the poem relives the last moments of a soldier’s life, as his memories flash before his eyes. He remembers old loves, an old song, and even senses the grief of his mother. The enjambment is placed in a way that tumbles the reader forward to the inevitable moment of death.

Two poems were especially fascinating in how they portray one event : in “Climb” the narrator is admiring a ladybug that has landed on his palm:

My eyes fix on her glamour
grand presence in minute scale

He seems a nice enough guy, yet in “Fourth Paradox”, it is figure of death, a “repugnant soulless killer”, that looks upon the ladybug he is holding:

Just who is who?  What has changed?  This disparity makes the reader wonder exactly who is in control…does death realize its powerlessness over nature?

This collection is one that requires some meditation to best enjoy.  The glimpses of human nature throughout combine to create a pensive mood,  one that enables you to consider such phrases as found in "Chrysalis":  "What in the image of absence is revealed?"


Special thanks to Manolis for this Review Copy.
Published by Libros Libertad of Surrey, BC.
Posted by Amy at 10:02 PM