The Tower, The Zoo, and the Tortoise-Julia Stuart

"...for the rest of the evening the air in the Salt Tower was so fragile that they spoke to each other as if the place were filled with a million fluttering butterflies that neither dared to disturb."

"Hebe Jones ran a hand along the bed sheet that had been a weding present all those years ago.  But it failed to find her husband." 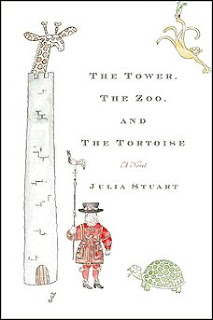 You might recognize an older bearded gentleman dressed in a Victorian uniform of red tights, dark blue breeches, matching tunic, and the classic white ruffle around the neck, wearing a blue Tudor hat, as an English Beefeater (possibly from a bottle of gin).  The official name of the guardians of the Tower of London is 'Yeoman Warder of Her Majesty's Royal Palace and Fortress the Tower of London, and Member of the Sovereign's Body Guard of the Yeoman Grand Extraordinary'.  For purposes of common use (and possibly for business cards) they prefer the term Yeoman Warder.  These Beefeaters were obligated to live in the dark and damp Tower of London-adorned with graffiti left from previous prisoners and occasionally visited by the ghost of Sir Walter Raleigh.  The Tower today is a hugely popular tourist attraction.

This is the engaging story of one such Beefeater:  Yeoman Warder Balthazar Jones, his wife Hebe, and the son they lost tragically, Milo.  The other denizens of the tower:  a prize-winning priest who writes pornography under an alias, another Beefeater 'Ravenmaster' who is cheating on his wife, and 'Mrs. Cook', a one hundred and eighty-one year old tortoise.  Other animals reside as well, and their presence gives the often dry Beefeaters occasional undignified challenges, such as when a special Etruscan shrew dies, and they decide to tell people it's hibernating, or when they term bird poo as "Parrot indiscretions".

Jones is a complicated man, obsessed with weather and avidly collecting rain samples.  An odd hobby, of course, but it's part of how he deals with his son's loss.  It's unique details that make the characters of this story special.  Julia Stewart has the ability to describe incidents in an unusual way;  her prose delights.  She also describes incidents in a decidedly English way which accounts for moments of humor that are a bit startling.

"Fury coursed through her veins at yet another night of disturbed sleep.  Her usual revenge, performed each time her husband returned...was an anatomical master stroke.  Once she heard the muddy breath of a man descended deep into his dreams, she would suddenly leap from the bed and make the short journey to the bathroom with the gait of a demented sentry.  Once installed on the lavatory, she would proceed to empty her bladder with the door wide open.  The clamour of the catastrophic downpour was such that her husband would immediately wake in terror, convinced that he was lying in a nest of snakes."

Enjoying the read, there was some distraction from a few repetitions of certain phrases.  The second phrase needed only a different word-order to smoothly convey the thought.  This is fairly common, as authors inadvertently do this all the time, but it's enough of a distraction that it jostles the pace of the story.  All in all, this is a fun read unlike any other I've read.  Note that the cover art appears almost as if it's a children's book, but the story within, while tame, is not intended for children.


Special thanks to Doubleday for the Advanced Review Copy.
Posted by Amy at 9:02 PM