Translated from the German by Kenneth J. Northcott
“everything now becomes a sign of something.” 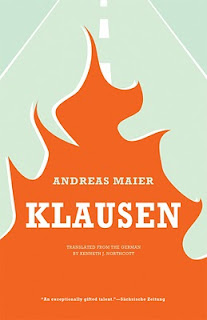 This would be a great subheading on the “Welcome to Klausen” village signpost. For within this small community, gossip and rumors, fueled by suspicion, make every event somehow significant. The fictional novel Klausen by Andreas Maier is based on many of the facts of this city, located in Northern Italy in the Bolzano-Bozen region, where the last thing the residents want is to be considered Italian. They prefer their South Tyrolean heritage, and their language of Austrian is the proof of their difference from Italy. The region is, in fact, an autonomous province, and one that is constantly at odds with their Italian neighbors. The region is a blip on the Autobahn A22, a place occasionally visited by tourists but usually left to its own devices.

In this novel, Maier focuses on the interactions of the residents, some long-time citizens and others who are new to the region and ready to develop parts of it. The shopkeepers keep tabs on everyone, and little goes on that doesn’t generate talk. The novel begins with one such event. Josef Gasser returns to Klausen from somewhere else. No one is sure where, or why, or what he is up to. His sister Kati is a much discussed topic in the small town, as she escaped and became a television star. But Gasser is less notable, and his behavior immediately strikes the townsfolk as odd. He doesn’t seem to want to engage with anyone, and he has no interest in old friends or even his mother. They label him an ‘industrious no-good’.

“…public opinion began to regard Gasser in a very critical light, because it was striking that he had said nothing about any of the issues that had been talked about and had expressed absolutely no opinion. This was not only seen as arrogant and presumptuous…, but it was also considered worrisome and even dangerous.”

Shortly after his arrival, other visitors begin talking about the noise from the Autobahn bridge nearby, with some opposed to its noise and others oblivious to it. Both sides begin a campaign of speculating and questioning the motives of everyone else. Soon an effort is made to actually verify just how big a problem the noise is, and the townspeople begin a free-for-all of dispute over the project. After some grossly exaggerated violence occurs, the town is now rabid with assumptions. Gasser becomes a prime suspect in an event that no one can even define.

Maier takes what could appear to be a wearisome premise into an amusing, if not hilarious, direction with his excelling talent at writing dialogue. He captures the heart of the people revealed in their seemingly idle chatter. He notices how tones change when people become suspicious. In one case a jacket is ‘misplaced’, with suspicion it becomes ‘abandoned’. A new meaning that alters everything. And it’s not just Gasser that is the victim of the gossip: an architect, Italians (in general), Moroccan squatters residing in an abandoned castle, even an aging poet become suspects.

In one particularly ironic instance, the mob latches on to the idea of three Pakistani workmen who live in the town as being responsible for an altercation. That the men weren’t present makes them all the more suspicious. A crowd gathered in a basement bar discusses them, and begins relating stories about them. At that unfortunate moment, one of the Pakistani men happens into the bar for a drink. Immediately he knows something is up, and as they begin to question him, he sees where they are going with their questions. When he resists answering where he was on the night in question, he is considered guilty. When he provides an alibi, he appears even guiltier for having one. He begins to fear for his safety because the crowd is looking for someone to blame, preferably an outsider. And thus the basis of the Klaussner’s resentment is revealed: they want no part of the outside. An “outside” world that to them is driven right to their doorstep by the Autobahn; a world inhabited by Italians, Albanians, Moroccans, and people different from them.

When I began reading this, I was slightly off track because of the blurb on the back of the book that mentioned a “crime scene”. I started reading in a linear direction, blinders on; intent on getting to what I thought was the point, the alleged crime scene. But about a third of the way I realized the story, crime scene or not, is in the dialogue. The eavesdropping on people so convinced in their own rightness that they abandon logic, and the gossip that spins out of control because no one is invested in finding the truth. At this point I restarted the novel, and it really helped me to grasp the humor that is dryly incorporated into the text. The novel is not for everyone, as for one thing, it’s basically one book length paragraph.

Maier also sprinkles truisms throughout the story that make give you pause: “Politicians look for problems to struggle against solely because they are looking for voters, and the best way to appeal to a voter is through the problem that he has, or thinks he has (or that the politician persuades him he has), and that this was all a disgusting process that never brought anything to people but great duplicity.”  The author demonstrates a clear observation of human nature, and how many will grasp at a ridiculous inaccuracy rather than a plain truth.


Special thanks to Chad Post of Open Letter for the Review copy.
Posted by Amy at 11:16 PM