The Sound of the Wild Snail Eating---Elisabeth Tova Bailey (memoir)

"...the snail had emerged from its shell into the alien territory of my room, with no clue as to where it was or how it had arrived;  the lack of vegetation and the desertlike surroundings must have seemed strange.  The snail and I were both living in altered landscapes not of our choosing;  I figured we shared a sense of loss and displacement." 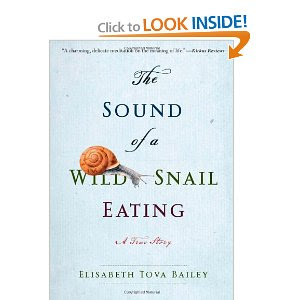 Elisabeth Tova Bailey was in her mid-thirties when struck with a mysterious illness that soon led to her complete incapacitation.  Without knowing the cause, much less the cure or the course that it might take, the disease was a frightening visitor.  One day, a friend stops by with a rather odd gift.  A snail, from out in the yard.  First placed in a flower pot and eventually a terrarium, the snail becomes Bailey's constant companion.  Because of her lack of mobility and energy, much of her time was spent observing the creature.

You might think this would be dull, or worse, that you'd be stuck listening to someone bleakly describing their every physical complaint.  Not so.  This book has very little to do with health issues and far more to do with curiosity and resilience.  Bailey is not a complainer, actual details of her health are few and without self-pity.  She doesn't simply give up either, she makes clear she wants to fight this unknown assailant on her life. That she does so with the help of a small snail is astounding.

The first surprise is that snails have a daily routine.  They have certain times to eat and sleep and travel.  They often return to the same place to sleep, and they sleep on their side.  (!!!)  As she watches the daily activities of the snail, she manages to study research on snails in general and in detail.  Turns out snail research is pretty deep...volumes have been written on every tiny detail.  As in:  snails have teeth, 2200+ of them!  Seriously, if they were bigger you'd think twice about stepping on one.  They also have a special talent for when the going gets tough in their little world:  they start a process called estivation.  It's not hibernation (they do that too!) but instead it allows them to become dormant when the weather goes bad, or they lose their preferred food source, etc.  Some snails have been known to estivate more than a few years.  The process of sealing off their little shell is fascinating, and a study in insulation.

Then there's the romance.  Researchers have studied that too, and I won't go into too much detail, but let's just say lady snails are not complaining about romance in their life!  Male snails really knock themselves out on the charm aspect.  So much of the research that is out there is fascinating, and Bailey sorts through it and shares the most interesting details.  This isn't just a science project for her, she sees parallels in her condition as well as the snail's.  Illness took her out of her social circle, and her life seemed slow and inconsequential.  And snails usually are a typical example of slow and inconsequential living:

"Everything about a snail is cryptic, and it was precisely this air of mystery that first captured my interest. My own life, I realized, was becoming just as cryptic.  From the severe onset of my illness and through its innumerable relapses, my place in the world has been documented more by my absence than by my presence.  While close friends understood my situation, those who didn't know me well found my disappearance from work and social circles inexplicable.

...it wasn't that I had truly vanished;  I was simply homebound, like a snail pulled into its shell.  But being homebound in the human world is a sort of vanishing."

What makes this memoir unique, besides her indomitable spirit, is that she doesn't push any sort of religious or spiritual agenda for her positive outlook.  There is no implied message, which is often a feature of such an inspiring book.  Her facts are based on solid research, and she doesn't waste words;  her prose is clear and precise.  Additionally, and this may be trivial, but the book is exceptionally beautiful:  little snail insignias, and designs,  poetic quotes, and the actual fonts and design layout make it lovely.

One word of warning.  Some inspirational "illness" stories often end up being the 'go to' gift choice for a sick friend.  I know of one gentleman, who, when diagnosed with a serious illness, received eight copies of Tuesdays with Morrie from well-meaning friends.  This is not that kind of book.  It would be a far better gift for a Type-A personality that needs to slow down in their hectic life, or a book just to savor for yourself.  It actually might make a great gift for a young person interested in science (the "romance" portions are tame).  In any case, this book made me want to reconsider how much of my hectic life could be slowed down to enjoy the smaller but ultimately relevant details in the natural world around me.


Special thanks to Kelly Bowen of Algonquin Books for the Advanced Review Copy.
This title releases in the US today, August 24, 2010.
Posted by Amy at 10:21 PM