Afghanistan is seldom the region that inspires happy stories full of contentment and joy.  This novel is no exception:  it's startling and brutal and yet unlike most other stories that have similar themes. What makes it unique is the premise that it begins with, and the way the plot unfolds.  Completely unpredictable, as the storyline you expect changes direction several times. 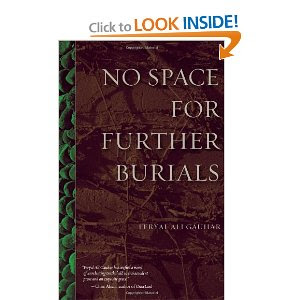 It begins with a US soldier being captured by rebels in a mountainous region near his base.  It's his own fault,  curiousity got the best of him and he thought it would be safe to explore a bit.  After being taken captive, he's placed in an insane asylum/hospital, a sort of drop-off place for injured civilians, orphaned children, and the mentally ill.  While it previously had a Canadian doctor and nurses caring for these victims, they were gone now, the nurses captured and taken.  Now it's nearly abandoned, cared for by a few Afghans who try to feed and comfort the residents with next to nothing.

The soldier, unnamed, is distraught and eager to be rescued.  His training as an EMT makes him helpful, yet he isn't trained to deal with the horrors he faces with the many inmates.  He tries to adjust to the lack of food, clothing, or even a blanket;  hiding in his cell when the inevitable raids take place.  He finds that, while trained in an 'immersion' program to help soldiers in the region, he really has no idea what the religious and tribal people are really like.

"It's not just a question of not having a decent meal or proper bed to sleep in, or even the knowledge that nothing is certain here except death.  What nags me most are the things we were taught before we arrived in this land, the tenets of war, the rules of engagement.  I keep going over them in my head, the virtues of our coming here, the need to liberate these people, the absolute necessity of enduring freedom.  Enduring.  Freedom.  Two words that don't mean anything to me anymore."

The longer he's there, the likelihood of rescue slims, in fact, it's doubtful his fellow soldiers would even know where to look.  He settles into the surreal environment:  nearly everyone is crippled in some way, including the children.  The soldier learns of religious traditions that harm women, and the senseless hate that includes brutalizing even the most helpless of children and the elderly.  Besides the physical damage (burns, loss of limbs, blindness, and battle scars), many are mentally damaged as well.  This is a region that is so highly volatile that no one family is intact:  death is everywhere and even the youngest inmates are dulled in emotion.  Suicide is an option many consider, in fact, that was the way out the Canadian doctor chose to escape.

Staying alive, finding food, and digging graves is his new routine.  Without a way to speak with the people, limited only to gestures and scratching in the dirt, he finds himself alone as never before:

"I have come to understand what it means to live inside the landscape of one's own mind, where one can create an entire new world, keeping it secret from others.  And I have also come to understand the silence of these people here, locked up in their own stories of loss and love and longing.  I do not want to intrude into their thoughts, and have learned that the silence between the words they speak carries more than all the words I have ever spoken."

As the story continues, he begins to refer to this strange mixture of people as his tribe.  He begins to change as well, as he accepts his future in the harsh place.  This is where the heart of the story is-who he was and who he is to become.  It's a thoughtful story, but the brutality in points is hard to take.  You are reminded throughout how evil and wicked humans can be to each other, and how fragile life is in any location.  Note:  Reading this may have an effect on how you interpret the nightly newscasts!

Special thanks to Johanna Ingalls of Akashic Books for the Advanced Review Copy.
Posted by Amy at 3:03 PM