The True Story of One Man's Passion for All Things Proust 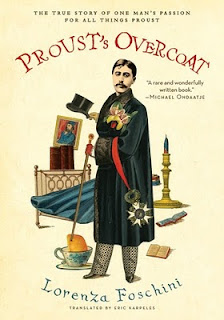 You'll find this book in the biography section of the bookstore, but at first it's difficult to decide who the biography is about....One the surface, it would seem to be a book about Proust, author of the iconic Remembrance of Things Past (which is incredibly difficult to get through), and/or his overcoat.  Actually, the biographical elements are about several intriguing people in the orbit around Proust's life, and all of them would make worthy topics of their own biography.  Combined, they make this study fascinating.

Foremost, the biography is of Jacques Guerin, an avid (rabid?) collector of all things Proust. His obsession leads him to search for anything related to the author, from old letters to furniture to ultimately, a personal garment of the man. At times his devotion is creepy, yet he seems to be completely harmless. His own life story is interesting, and his biography is well-researched. Foschini shows her skill as a biographer because she skillfully reveals personal characteristics about Guerin, but she also knows Proust's work, so when she makes a statement about Guerin she's able to actually use a Proust quote to elaborate on his fetish. As she tells about Guerin, she is also relating the biography of Proust, from his birth to his death. It's an interesting way of switching back and forth from the collector to the collected. So is it a biography of these two men? Where does the overcoat come in?

The overcoat itself, seemingly trivial, becomes part of the mystery of Proust, as many pictures (included in the book) show him in it.  Foschini quotes various authors of the era, all who referred to the overcoat as one of the elements of Proust's persona.  Foschini even incorporates her own search for the overcoat within the book.

She also intertwines the story of a collector who helps Guerin in his search, and who is a fascinating character with his own complicated connection to Proust. Adrien Proust, Marcel's brother, and his wife, Marthe, are also discussed in detail. The revelations are never dry, but often amusing. For example, Marthe gets a glimpse of what she is marrying into when her mother-in-law arrives at the wedding in an ambulance, and her brother-in-law tells others the wedding nearly killed him and he had to retire to bed for weeks to recover. Nice!

Marthe is an intriguing person at the center of the biography as she had much of Proust's works destroyed as soon as her husband died and she could get away with it. Foschini reveals why Marthe harbored so much anger at Marcel Proust, and how intently she tried to escape the family connection. The combination of all these interesting people makes this a too-brief biography that reads much easier than Proust (I believe it was Jon Stewart who said that anyone who reads Proust at the beach can be clinically defined as an insufferable ass).


This book releases Tuesday, August 3, 2010.
Special thanks to Ecco-An Imprint of HarperCollins, for the Advanced Review Copy. www.eccobooks.com
Posted by Amy at 9:56 PM