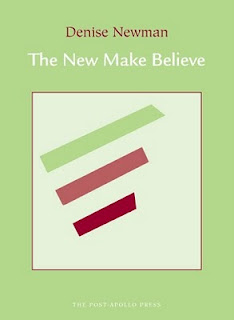 Denise Newman is both a poet and a translator. This grasp of the variances of language, and meanings, puts her in an especially appropriate position to play with words. In The New Make Believe, she does just that: changes one word in a line and changes the direction of the poem. Or she’ll substitute one word to create an entirely new pictorial image. In other words, she defies what you begin to suspect as you read. This is not in any way ‘ordinary’ poetry (if there is such a thing). It’s almost as if she’s teasing you to reconsider what happens when a train of thought is interrupted, derailed, reversed, or placed on a siding.


One of my favorite verses is in “Wolf”:

She also observes the value of self and space. In “Please Hold” she links the idea of communication and comes up with the best reason ever to not answer the phone: “when the phone rings-don’t answer-don’t flow in another’s stream, not yet”. No wonder it’s impossible to have a quiet moment to think, ponder, or ‘make believe’ if you’re allowing someone else to snap you out of your space.

The collection is divided into four subjects with four different subtle themes. I have to admit I don’t understand all of them, but I think that she intended to leave an interpretation open to what the reader fills into the empty space.  Thus, the reader is allowed to create their own 'make believe'.


Special thanks to Lindsey of the Post-Apollo Press for the Review Copy.
Posted by Amy at 11:02 AM