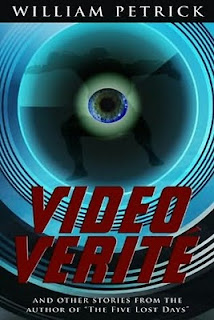 This is a collection of short stories by William Petrick, who is also the author of the newer title The Five Lost Days.   I wasn't really sure what to expect, because I've found that many authors are good at one style (like short stories) but not at another (like a novel).  Since I had both titles on my shelf, I started with this one, and now I'm eager to read The Five Lost Days to compare.  If it's half as good, I'll be pleased!

For one thing, Petrick creates complicated characters with few words.  He doesn't spend pages describing them;  instead, just a few words of a conversation or a significant pause (or look) tells you what they are about.  The stories themselves are not hugely complex either...in fact, they are fairly simple and straightforward.  So what is revealed?  Petrick's characters do not do what you expect.  Their actions are surprising, but at the same time make perfect sense, after the fact.

In the title story, Video Verite, the meaning of the word 'verite' has a chilling significance:  "a form of documentary film in which a small, hand-held camera and unobtrusive techniques are used to record scenes under the most natural conditions possible."*  In this story, a man volunteers to film his skydiving friends as he freefalls with them, but with a tragic ending.  In just a few words, the story fills you with tension and horror, and yet even more revealing is what happens to the video itself.  Petrick reveals parts of the human personality that cannot be explained.

Another story is The Captain, about an Army captain stationed at Warrior Base in Haiti.  He considers himself a liberator, and has moral questions about his tour there.  Yet when he behaves according to his code of honor, he finds himself the victim of an almost mythological punishment.  He remembers his father and his advice not to trust emotions: "If you don't control them, they control you,...That's your weakness, young man.  You're impatient, and you lose control."  Petrick juxtaposes the concepts of warrior, liberator, and loyalty in a very short piece that makes you reconsider the meaning of those terms as well.

The stories revolve around hitchikers and mechanics, prisoners and park rangers.  Small things take on special significance:  a wristwatch, or a perfect view.  This is an engrossing collection, and my only problem with it is that my dentist is named Dr. Petrick, no relation I'm sure, but I kept thinking he was the writer and it gave me a weird sense of apprehension.  Alas, this is no trip to the dentist!  Much better!


Special thanks to Mike Murray of Pearhouse Press for the Review Copy.
*http://www.yourdictionary.com/cin-ema-v-erit-e
Posted by Amy at 1:27 PM