A True Story of War, Love, and Survival 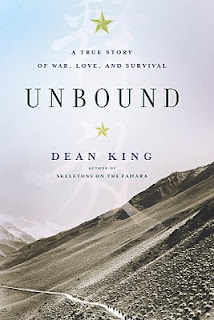 Detachable reference bookmark. Three little words that mean a great deal in this non-fiction text about the Long March in China that started in 1934, and this bookmark, as simple as it sounds, provides the key to author Dean King’s research. He reveals the story of thirty amazing women in an easy to understand way, despite the mountains of facts and details he uncovers. The bookmark itself is a shortened “cheat sheet” in order to keep track of fifteen of the more notable women. Just by providing it, it shows that the text is going to be accessible and personal. More interestingly is that this book really has nothing to do with politics…it’s the story of the desire to escape and finding the power to do so.

First, what was the Long March? Mao’s Communist army in China was being threatened by Nationalist forces, and needed to make a quick departure to an area that had Communist allies, some 4,000 miles away from their base of operations. They undertook this migration, one of the most significant in history, in secrecy, putting 86,000 men on a journey in stages that led to the death of most of them. Besides moving the officials and main soldiers, the march also carried valuable documents, funds, printing devices, and a medical core. Thirty women with them carried most of the duties of the convalescent care. Most of the journey was taken at night, in smaller regiments, and it took three weeks before Nationalists realized they were on the move. At times, it seemed that many of the soldiers were disposable, as the treacherous night-time journeys were anything but safe.

Why these thirty women? These women had served the Communist Party as recruiters, and were considered strong soldiers themselves. They were attracted to Mao’s Red Party because it freed them from the traditional Chinese way of life, which for women was one full of despair and pain. For example, foot binding, that horrific yet traditional ritual, broke the bones of a girl child’s foot, folded the toes under to the heel, then bound them with ribbon. The goal being “lovely” three-inch feet, a sign of nobility and yet sheer mutilation. Women in their traditional Chinese roles were either drowned at birth, sold for money, or used as unpaid and brutalized servants. Therefore, Mao’s promises of equality, respect, and the end of peasant traditions appealed to these women, the youngest two being just 10 and 11 years old when they joined the Long March.

Some of the women had been raised in wealth and schooled outside of China. Others were the same peasants described above. Yet they joined as comrades, and the most astonishing fact of the whole book is that all thirty survived, despite the death of the vast majority of the men. Their close ties made them fight long and hard, not just for Mao’s goals, but for what they perceived as the benefit of Chinese women in the future. Additionally, they were not used as prostitutes for the Army, but rather as equal soldiers, carrying their own weight in assignments and in battle.

One American observer stated that “their strength lay not in a rigid military hierarchy-although they tended to revere their leaders-but in a democratic structure that made the troops feel responsible for their own and their comrades’ actions.” Many of the women suffered health problems and difficulties in maintaining their strong tradition of modesty in such conditions. Some women gave birth on the march and left their newborns with villagers to rear. Unimaginable, it seems, yet they were convinced they were contributing to a ‘greater good’.

When it was all over, Mao claimed that the Long March was almost 8,000 miles. He inflated the figures for a distinct purpose. He felt that the completion of the march proved the power of Communism. He attempted to set standards for his soldiers, and provided rules requiring civilized behavior of the marchers towards local peasants they may run across. But as the march continued, it became a reign of terror at times, where any Chinese that they found who had any form of wealth were immediately assumed to be guilty of Nationalistic tendencies, thus their possessions were confiscated. Any kind of disagreement or insubordination among marchers ended with death, and so Mao’s ideal wasn’t always realistic.

One especially clever woman in Mao’s Army was Cai Chang. She and others would question peasants to find out who the wealthy were among them, in order to collect supplies and foodstuffs. Most peasants learned to lie, so she found a craftier means. On some kind of elevated location, she’d overlook the village and look for newer homes. She’d look for especially well-kept cattle pens and signs of status. Then they’d go into the homes and if they found signs of wealth, they would pack these as provisions, feeling completely justified because of the assumed guilt of the householder.

Did any good come out of the Long March, given the future crises to come in China? One example is that “the Communists revolutionized the legal standing of women and children in the Marriage Law of 1950, which banned arranged marriage, child betrothal, concubinage, and infanticide….The law mandated …the protection of the interests of women, widows, and children. This was a key step in institutionalizing the change in the role of women in China from passive domestics…”

This is a heavily detailed book, and really my only complaint (a minor one really) is that it is so full of names, dates, and facts that at times it gets a bit overwhelming. So it’s not simply an easy beach read. Yet King writes in a personable way that draws out the unique characters that make each woman stand out with their personalities and traits. The bookmark helps!

Originally I wanted to read this because of an interview with King, where he describes undertaking the research as the father of young women, and trying to imagine the parallels for women then and today. A link to this interview is provided below.


Special thanks to Kelly Leonard of Little, Brown for the Review Copy.
Interview:  http://www.blogtalkradio.com/littlebrown/2010/04/15/interview-w-dean-king-author-of-unbound
Pictures and info about King's travels to the region for research: http://www.deanhking.com/
Posted by Amy at 11:40 PM