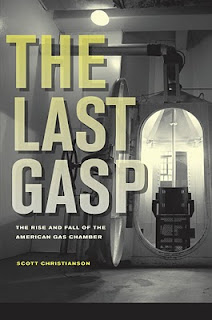 “The earliest gas chamber for execution purposes was constructed in the Nevada State Penitentiary at Carson City and first employed on February 8, 1924 . . . the first execution by gas arose as a byproduct of chemical warfare research conducted by the U. S. Army’s Chemical Warfare Service and the chemical industry during the First World War . . .”

From the advantage of current access to court cases and other documents, Scott Christianson has compiled a weighty tome devoted to the history of the Gas Chamber.  The book is heavily referenced and authoritative. Christiansons’ background as an investigative reporter and historian uniquely qualifies him to take on this subject.  Personal and political ties influenced many decisions in regard to the development and use of deadly chemicals. In his detailed account, names are named and you will recognize them.

In the early 1900s, racism was pervasive. Immigrants were viewed with suspicion. Many prominent persons believed the defective and unfit did not deserve to live and certainly not to reproduce.

“If I had my way, I would build a lethal chamber as big as the Crystal Palace, with a military band playing softly, and a Cinematograph working brightly, and then I’d go out in back streets and main streets and bring them all in, all the sick . . . the maimed; I would lead them gently, and they would smile a weary thanks.”
---D. H. Lawrence.

German troops introduced chemical warfare in 1915. It had the advantage of rendering a battlefield uninhabitable, but the greatest impact was psychological. Before WWI the use of gases was considered dishonorable under the rules of warfare, but after the German’s use of it the Allies decided that “there was no choice on their part and that they had to retaliate in like manner.” In secret, America’s chemists rushed to catch up to Germany’s chemical development. They tested more than 1600 compounds on mice, rats, dogs, and other animals, as well as on American soldiers.

After the war, the powerful chemical lobby wanted to keep the gas technology they had developed, but turn it into “constructive peacetime uses.” Scientists were testing poisons to fight fires, make dyes, exterminate insects and animals, make fertilizers, to fumigate ships in all of America’s ports, and to fumigate fruits and other foods. It was used in the miningindustry to separate silver, gold, copper, lead, and other ores. Claims were even made that poison gases could rid the world of cancer and other dreaded diseases.  In 1921 Nevada enacted the Humane Execution Law and became the first state in the world to require the administration of lethal gas to legally end human life. The news of the first two executions flashed around the world. Other states followed Nevada’s lead. But in harmony with the eugenics of the time, it was often the poor, the mentally handicapped, and minorities who were killed.

“Hitler’s concept of concentration camps as well as the practicality of genocide owed, so he claims, to his studies or English and United States history.”

I was amazed at the degree that American financiers bankrolled fascist regimes in WWII, as well as the secret alliances of prominent men that were hidden through a web of trade agreements. They are named in this book and referenced, and I congratulate Christianson for his thoroughness in following the paper trail.

At the advent of America’s entry into WWII many feared Germany’s use of chemical warfare again. Winston Churchill stated, “The only reason they have not used it against us is that they fear the retaliation.”

“Hitler used the press of war to secretly authorize a euthanasia program that at first was ostensibly limited to eliminating an incurable sick patient . . . “

Hitler emptied the mental hospitals in his ‘mercy killings’, and upon public outcry, the euthanasia action secretly shifted to concentration camps. Christianson lists these camps and their methods in stark detail.

“The word went out . . . about the immense scope of the genocide. Yet nobody noted that it been the United States Army and American scientists, industrialist and politicians who had invented the gas chamber in the first place . . . Nobody stated the lamentable fact that the radical eugenicists and racial supremacists seemed to have gotten what they had wished for.”

“Pursuing this haunted path has brought great sadness; my battered heart grieves in the memory of those lost.” ----author Scott Christianson

This book is fascinating yet brutal.  He spares no detail in the descriptions of just how these chemicals work, and his history proceeds seamlessly from early development to current uses of these poisons.  He combines history and science, as well as legal reasoning with humanitarian concerns.  It's not a happy read, but one that reveals a relatively unknown part of modern history.


Special thanks to the University of California Press for this Review Copy.
Posted by Amy at 12:40 AM