WKRP in Cincinnati.  It was a sitcom in the early 80s, I think?  Without disparaging this work of literary fiction, I was somewhat reminded of that goofy little show.  It was set in a radio station, but made memorable by the collective weirdness of every character in the ensemble cast.  Each episode seemed to focus on one person's problem, usually humorous, and filled out with the other characters who rotated in significance per the episode. 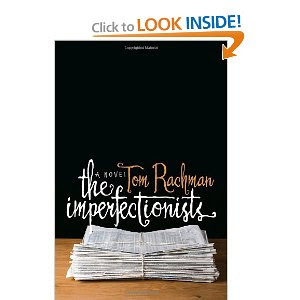 In The Imperfectionists by Tom Rachman, there is a similar layout to the novel.  Instead of a radio station, it's a daily newspaper in Rome, with mostly expats running the show.  Often funny, sometimes bleak, the book moves along and introduces you to each character separately then shows them as part of the whole.  No sight gags or corny humor like in WKRP, but a feeling of tolerable camaraderie between people thrown together and not especially liking it.

Richman doesn't use any cliches: there's no "Devil Wears Prada" evil boss, and even the most insignificant of copy editors has a life outside the newsroom that is a story in itself.  That's why the novel is so fascinating.  Without one single main protagonist, much more is in play that makes the story move.  There's the obnoxious Snyder, who constantly travels to different war zones seeking a story, but remains oblivious to human tragedy.  He decides that knowing different languages interferes with his objectivity, so all sources must speak English.   Business editor Hardy, an intelligent female reporter who is so desperate for a companion that she finds a relationship with the loser Rory who robbed her apartment.  Lloyd, who has no relationship with any of his children, and really nothing in his life of value, resorts to falsifying stories just to make a little money.  And Dave, who enacts the perfect revenge on the accountant who fired him.  Then there's the spell-check program that renames an important historical character "Sadism Hussein."

Finally, there's the love letter Ott wrote, never seen by his beloved:  "I built and I built-heaven knows that I have done that well.  Those skyscrapers, full of tenants, floor after floor, and not a single room containing you."

In all, Rachman creates these characters amid the underlying theme of a newspaper trying to make money in the age of the Internet.  He contrasts the tactile importance a newspaper used to have with the overload of information online that can't even be grasped.  Instead of lecturing about this relevant information, he shows how the newspaper changes in content over three generations of owners-the Ott family.  This is a fun read, full of laughs but tender and meaningful too.


Special Thanks to Dial Press for the Review Copy.
Posted by Amy at 10:33 AM