A strange way to start a book review, yes? In regards to this title, however, and all the buzz that has surrounded it since its release, I think it’s necessary to offset some of the descriptions of this book. 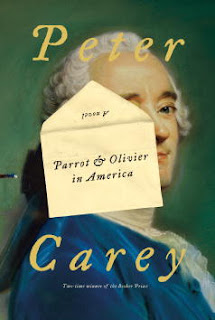 Many, if not all, of the reviews of Parrot & Olivier in America refer to Democracy in America by Alexis de Tocqueville, pretty much the standard for history in the early US. They connect the character of Olivier with that of de Tocqueville himself, and suddenly the idea of reading this book sounds like a snooze. It’s not that way at all, and I think while the similarity exists and may be intentional by the author (who quotes de Tocqueville), it’s not a very good way to introduce this book.

Parrot & Olivier is an insightful yet amusing narrative of the lives of two wildly different characters, as well as the time they lived in. First, Olivier…the son of French aristocrats who needs an escape plan that doesn’t necessarily look like an escape. He needs to get out of France for his protection after the French Revolution, so after some thought it’s decided to send him to America to research the penal system in the colonies. It’s a useful out, as whatever he may learn is politically valuable in France, plus it gets him out of the country in a perilous time. Parrot is an older man, a survivor of many political battles and social conflicts, and his ability to survive in desperate conditions makes him the perfect chaperone for Olivier. Parrot, of course, hates the thought of babysitting the privileged son, and has to be coerced into leaving. It should be noted that before the departure ever takes place, Carey tells the story of both of these men separately, relating their character as well as significant details about the Revolution and how they had to use their wiles to survive.

Once they leave France, the story picks up even more, and the pace is fast as they both journey into both a new land and new situations. They end up bickering, fighting, separating, and finally bumping into each other again. The scene that finds them reunited is a street fight, where Parrot thinks he’s saving Olivier, only to be unexpectedly saved by the well-armed boy. It’s a funny moment, one of many, but it points to the difficulties of survival in this new place without some sort of backing.

For his part, Olivier has no interest in the study of the prisons, and yet his actions lead Parrot to have to experience them firsthand. The interaction between the two and the period details, especially in New York, make this a fun, lighthearted read. One thing that Alexis de Tocqueville said, however, in his book, does apply beautifully to the theme of Parrot & Olivier:

“The growth of nations presents something analogous to this; they all bear some marks of their origin. The circumstances that accompanied their birth and contributed to their development affected the whole term of their being.”

Carey uses this novel to actually study how these two men developed from their vastly disparate births, with a conclusion that leaves you pondering the entire concept of class, friendship, and the sense of belonging.


Special thanks to Lauren Helman of Knopf for the Advanced Review Copy.
Last week this book was also nominated for the 2010 Booker Prize....
Posted by Amy at 10:03 PM