Blue Has No South, Alex Epstein 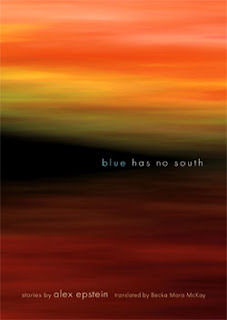 I can't decide if these are short stories, lyric essays, or poems.  In any case, Epstein has compiled little moments of mystery and romance, history and humor, into this slim volume from Clockroot Books.  There are no dramatic flares, and no heartbreaking losses.  Instead, the situations and events he describes in these short pieces are simple, personal, and honest.  There is emotion, but the quiet kind endured by quiet people, an emotion that reads far more realistic than some authors can describe effectively.

"In the winter they buy a digital camera as a surprise for the grandchildren, but they don't know how to connect it to the computer they bought the year before....the old couple takes pictures of each other.  In March the woman dies in her sleep.  Her husband finds the instruction manual that came with the camera and reads about pixels, about digital zoom, and jpeg and avi files, and other strange, miraculous concepts.  In May he finishes the instruction manual, and removes from the camera the 1-gigabyte memory card.  He places it in his deceased wife's jewelry box and closes the lid."  The picture he has created in so few words reveals the enthusiasm of this couple to share with their grandchildren, the shock of death, and the quiet picture of a man diligently trying to figure out how to save her face.  That he doesn't wish to share this "memory card" illuminates how deep his feelings are.  I could easily picture him in a chair, trying to decipher the jargon and afraid of messing something up and losing the photos forever.  Epstein puts all that into a deceptively simple little paragraph.

In "Another Way Out", he tells another picturesque story.
"A king once imprisoned a poet in a cellar and demanded he find the most beautiful word in the world.  This legend has infinite endings.  In one, the poet dreamed he carved the word on the cellar's ceiling. When he awoke, he didn't remember it-only that it was written in the font now called FrankRuehl.*  In another, the poet doesn't discover (even in a dream) a hint of the word.  All he manages, completely by accident, is to invent the game of chess."  It has a fairy tale quality, dungeon and all, but the revelation of finding the most complicated game, the game of kings, in a search for beauty, is somehow exactly right.

Alex Epstein breathes life into a variety of topics in this collection:  cosmonauts, lost cell phones, dreams, and an escaped elephant heading to another zoo in search of lost love.  They are quirky and youthful but lack the sarcasm and edginess that sometimes settles into modern verse.


Special thanks to Hilary Plum of Clockroot Books for the Advance Reading Copy.
*FrankRuehl font is the ubiquitous Hebrew font style. There are many fonts that belong to this style, and all are based on an early 20th-century design by Raphael Frank.   Interesting to note that this font, as well as the popular Arial font, are both representative of Hebrew origins in printing.
(From http://www.microsoft.com/typography/fonts/family.aspx?FID=237)
Posted by Amy at 12:16 AM