This book was hard. Really. That’s the first thing to say. Some of the concepts were so over my head I didn’t even know where to begin. So I put it down, and did some research on Hayden White, the author of this collection of essays. Turns out he’s a rock star in the world of narrative theory and literature. Born in 1928, he produced these essays independently, before Robert Doran, the editor, compiled them as one unit for Johns Hopkins Press. 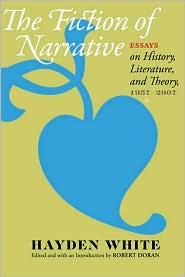 I needed to learn a few things first. “Tropes”, for one. These are figures of speech that allow for metaphors, irony, and allegory to fit in with a narrative. For example, saying that a policeman is “the long arm of the law” is a trope. Get it? When a news outlet says, “The White House reports that…” we know that they mean a representative of the White House stated something, not that the building itself spoke. White discusses these tropes at length, and it appears that he asserts that you can identify a period in history by the tropes used to describe the time. I’m way too dumb to analyze that.

However, I did continue with the book and I have what I hope is a basic grasp of White’s theories on literature and history. He takes to task those who say a history book is a neutral text, and that history can be described without any political leanings or personal slant. And the use of tropes is just one way to reveal the subtle motives an author may have within his text.

In terms of history, the editor Robert Doran noted, after discussing the literary technique of foreshadowing, that “and so with history: to confer meaning retrospectively, to see one event in light of another as narrativistically connected (if not constructed), is precisely what history does. Obviously, the French Revolution would have a very different significance if the Axis powers had prevailed during World War II…And how could the election of the first black president of a nation founded by slave owners not be regarded as the figural and ultimately ironic fulfillment of the national ideals as set forth in this nation’s constitution.” So in viewing a past via present knowledge surely changes how that past is interpreted, and how it is explained.

Of the essays included, my favorite was “The Structure of Historical Narrative” that White wrote in 1972. Partly because of recent research on de Tocqueville and partly because of how he explains literary conventions in a historical setting, I found this essay fascinating. He takes two iconic works of history and contrasts their styles. One is de Tocqueville’s Democracy in America (remember Parrot & Olivier?) and the other is Leopold von Ranke’s History of Germany during the Age of the Reformation (other works are mentioned as well). White states that Ranke’s work “tells a story with a beginning, a middle, and end….its subject is an entity that is undergoing a process of change from one condition to another while remaining identifiably what it was all along…it “explains” what happened during the process of change.”

Contrasting this is Democracy in America, which has an indeterminate style that lacks the framework of Ranke’s book. Instead “it can be said to have a kind of beginning, consisting of a background sketch of how democracy was born in Europe” and then goes on to give “an account of the institutions and forces in play in American democracy at the time of the writing of the book.” So it doesn’t fit the story model that Ranke uses, and instead leaves the conclusion to be drawn from what the reader knows. This of course, changes by who the reader is, as well as the fact that future readers in succeeding generations will be able to apply to it what they’ve seen occur in history since.

What I took from this, both as a reader and a wannabe author, is that structuring a narrative is far more than throwing in a few twists, some clues, some memorable characters, and a stunning denouement. Instead, leaving options open for the reader to insert their own perceptions would likely lead to a more appealing and insightful novel.

Additionally, in researching White I found a remarkable story about a legal battle he had with the Los Angeles Police Department in 1975, one that went all the way to the California Supreme Court. In it, he asserted as a professor at UCLA that the LAPD were posing as students to gather information on campus about teachers and other students. Tax money was being spent to support this illegal surveillance. He won the case, where the Supreme Court determined that without a specific crime to investigate, the police couldn’t simply troll for information on the UCLA campus** White is now retired, having taught at UCSC and Stanford.


Special thanks to Johns Hopkins University Press for this Review Copy.