The Canal by Lee Rourke

Flat-screen monitors, an old park bench, the "Park Crew", suicide bombers, swans, an Airbus A320, an Audi TT 225, an unknown woman at a funeral, boredom... 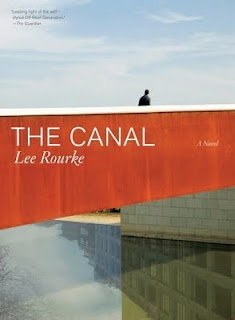 All of these things factor together to make The Canal by Lee Rourke a fascinating glimpse into boredom.  How can boredom be interesting?  Don't we avoid it?  The unnamed narrator has left his job, spending his days ruminating on life on an old bench near a canal in downtown London.  It's not the most scenic location:  dirty water, a roving gang, commuters, and the occasional coot or swan may pass nearby, but no one seems to sit.  Until him.

As he sits, he imagines the lives of the people who, quite literally, cross his path and he reflects on his own experiences.  Having the freedom to just sit is something he's not used to:  "it's the power of everyday boredom that compels people to do things-even if that something is nothing."  He notices that all the efforts to avoid boredom, usually in order to be more productive or to entertain, never really accomplish anything.  It is 'found' time, an appreciation for not filling every moment, that makes time more meaningful for him.  And this he does, spending more and more time at the canal.    It is only after the pace of his life has slowed that the really exciting and life-changing events begin to happen.  But this is no new-age inspirational story.  What he discovers are terrible crimes and intentional cruelties, all tied together by acts done out of boredom.

"I've often thought that we seek reality in places and not in ourselves....We need things, extra things that help us to make sense of it all;  we need the space where things can happen, where these spaces become a thing-it is only at that point, when space becomes a thing to us, that we truly feel real."  The narrator considers the nature of time as an object, one to be treasured.  The different characters he meets are similarly lost, filling up time without understanding that their actions are actually just throwing it away.  "It baffles me why people are so obsessed with trying to fill this time with holidays, cars, designer clothes, technology, energetic sports, et cetera.  Why would they want time to pass by quickly?...Those who bemoan the speedy passing of time at the end of their life are surely those same people who tried to fill it up with things to quicken its passing anyway, aren't they?"

The novel is brief:  we know little about the narrator's appearance, home, or prior job.  He doesn't even have a cell phone.  We know small details about his family but the impression is that he doesn't see them.  He's a complicated figure:  he is fascinated by flight, admiring the planes descending into Heathrow, and yet he's nearly motionless himself.  Throughout the remainder of the story, the concepts of time and flight intersect, and the denouement finds both fractured.  The effect is complex and mysterious and one of those rare books that may yield more insight by being read again.


Special thanks to Megan Halpern of Melville House for the Review Copy.
Posted by Amy at 6:48 PM