A Place of Meadows and Tall Trees by Clare Dudman

The Patagonia region of Argentina is nearly desolate, even today.  Extremes of weather, especially of wind, and the fierce dry cold make it virtually uninhabitable.  Yet this is the location of a new colony of people, who left North Wales in 1850, and made to believe they could settle it and live in a peaceful, religious community.  Poverty, violence, and debt made these people eager to leave and start over, and a charismatic leader, Edwyn Lloyd, assures all of them that this new world waits for them with abundant wealth.

"so much has been stolen from us-our land, our language, our culture!  But soon we shall endure no more.  Soon you will see our promised land....Cattle!  Trees.  A splendid river.  And grass- oh you should see it-mile upon mile of the most verdant pasture....A place where God's law shows us the way!" 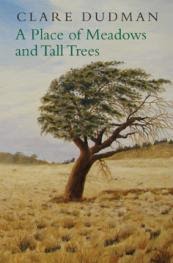 Many make the long journey by boat, and several die on board from illness and lack of food.  Where they end up is far from verdant and lovely.  The hard and unforgiving landscape immediately places the settlers in danger, and discord breaks out between them  Additionally, Edwyn finds the going so rough that he disappears as well (although he returns later).  Reports of violent local Indians scare the Welsh visitors, and they are abandoned to nothing, with no communication or supplies.

Death is frequent, as are squabbles over power and leadership.  This story focuses mostly on men in distress.  While the women care for the children and domestic matters, the men try to figure out how to create this new society.  By virtue of this, the men are actually the most interesting of the characters.

First is Silas, who lost one child on the journey and another upon arrival.  He remains in the background during the fights over control.  He's strong and opinionated, but his strength is in observing the nature of the other men.  It is Silas who manages to create a relationship with an aging Indian who approaches them.  His brother-in-law, Jacob, however, is far less wise.  He craves attention and desperately wants to lead, despite his lack of experience and disinterest in realism.  He's so blinded by his religious belief that they are destined to make this society work, that he feels no need to participate in actually doing the work.  He's a weak and pathetic man.  Selwyn, a Welsh man who spent time in Wisconsin, is more realistic and cynical towards the situation.  He and Silas appear almost as an alliance in order to keep the others calm and avoid violence, since many of the newcomers think they can take on the Indians themselves.  The themes of power, respect, and racial superiority are explored in a fast paced and unpredictable narrative.

I enjoyed this book, especially the descriptions of the flora and fauna of Patagonia.  I actually Googled some of the locations just to visualize the scenery.  I think the men were well defined and their actions were realistic.  However, the women in the story seemed more stereotypical;  some were actually panicky and delicate and hysterical.  The imbalance isn't total: there are some strong women.  They just aren't as fleshed out as the men.  What was frustrating in the reading was the singular belief in the superiority of their race over the indigenous peoples, a reality that is as likely as it is unfortunate.

However, in all, this is an excellent story with a premise and delivery unlike anything I've recently read.


Special thanks to Simon Hicks of Seren Books of London for this review copy.
It goes on sale today in the United States.
Posted by Amy at 12:08 AM