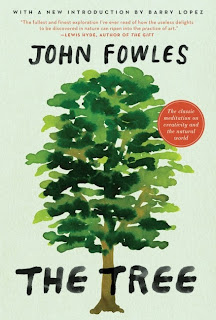 This is the 30th anniversary edition of John Fowles legendary essay about trees.  Or rather, what trees mean in a greater sense than just the biological.  At first, I expected this to be similar to Rachel Carson's Silent Spring-both were written decades ago.  However, this slim text is more of a set of questions rather than answers.  In fact, despite the title, it could be said that trees are just the smallest portion of his purpose.

"Do we feel that unless we create evidence-photographs, journal entries, picked and pressed flowers, tape recordings, pocketed stones-we haven't actually been intimate with nature?"

Fowles was known for writing The French Lieutenant's Woman as well as other fiction titles.  Here, in this book, he discusses via anecdotes the relationship between humans and nature, and the juxtaposition between nature on its own and our experience of nature.  First, the introduction by Barry Lopez comfortably sets the scene, and hints that this is no simple environmental manifesto.  And never does Fowles lecture about how people should view nature;  rather, he talks about what nature may or may not mean in a larger sense.

For example, he talks about his childhood home where his father cultivated small garden and fruit trees.  Nothing was out of place, and while it was in the city, his father managed to tame anything unruly from the garden.  Clearly it was his goal to conquer the plot of land. He was the victor over it.  Yet his son, Fowles, purchases property that is larger, but by no means tame.  Fowles neither cultivates or cuts back, he sees no point in amending the soil, pruning the trees, and to the horror of his father, the parcel of land is wild.  Is it a moral battle over who conquers the natural world?  Is it nature if you've directed its every movement?  Fowles doesn't presume to answer, he just asks.

In a further irony, which tells a great deal about his father, Fowles recalls how his father could walk for miles in the city, yet would only hike a few hundred meters in the countryside.  The untame pastoral scene frightened him or inhibited him, likely because of its chaos.  Thus, Fowles discusses chaos in nature, and how the most lovely of scenes is never the most natural.  He also makes a valid point that our modern society, with three decades of hindsight added since this was written, has used film and photography to 'show' nature, making the interaction with it less urgent.  How often do people seek it out?  Is putting a pot of daisies on the patio nature or decor?  Do we travel to faraway places to imbibe unique cocktails or are we willing to hike in a forest for no other purpose than to look?  Again, he gives no condescending or judgmental answer, he just asks thought provoking questions.

Since the last few years have produced epic and beautiful DVD collections for large screen televisions, like Planet Earth, does nature seem to be something we order up on the Netflix queue or purchase at Costco?  It should be noted that this is not a nature 'journal', nor a guide to trees.  There are no photos or etchings to illustrate it, and that's appropriate in that Fowles doesn't feel a photograph can replicate nature satisfactorily.  I enjoyed this very much, and wish that Fowles would have spent a bit more time discussing his own experiences, as well as suggested ideas for conservation and preservation.


Special thanks to Rachel Bressler and Michael McKenzie at Ecco Books for the Advance Review Copy.  This title is newly released.
Posted by Amy at 4:40 PM