The Death of the Adversary by Hans Keilson

Translated from the German by Iva Jarosy
“One cannot cut the lines of experience out of one’s face, like the rotten bits in an apple; one has to carry them about in one’s face and know that one carries them; one sees them, as in a mirror, every day when one washes oneself, and one cannot cut them out, they belong there.”


“He had swore to her…that this was how it had all happened, as though he had first to mist the mirror slightly with his breath before he could dare to look into it. […] What can a man do but breathe at the mirror and look gently at his misted image?” 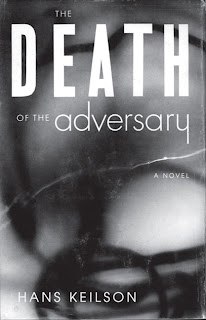 Mirrors are a repeating motif in Hans Keilson’s novel, The Death of the Adversary. Written during WWII, this novel has been republished this year. The Los Angeles Times wrote enthusiastically “It's as if, one morning, we were to learn that not only had Anne Frank survived the secret annex but was also still among us.” (Sept 26, 2010*) Mirrors generally symbolize self-reflection and contemplation, and are fittingly used to describe the inner questions that plague a young man as he realizes that Hitler’s influence was inevitably going to change his life. First, he hears his parents whisper and worry, and tries to decipher the codes they seemed to be speaking in. Next he finds himself an outcast in the neighborhood as the other children begin to avoid him. His mother takes the well-intentioned step of intervening on his behalf, trying to convince the children that they are all alike and should play together. His humiliation is complete, and never fully leaves him. Thus, he begins focusing on his “adversary”.

“…enemies will never die out in this world. They are recruited from former friends.”


The next salvo comes from a close friend who reveals he supports Hitler’s agenda. He explains to the unnamed protagonist that it is simply a matter of balance: just as elks need wolves to control their species and balance their habitat, so too, Germany is balancing itself. For the greater good, he implies. Their friendship quickly dissolves. The young man now explains the details of his experience, from strained friendships to watching his parents change to going into hiding.
Certainly, this novel has a more mature voice than Anne Frank’s diary. The protagonist is more somber and definitely more pessimistic. I didn’t find that the story gave any exceptionally new revelations about the time period, but it does provide a new perspective to describe the experience. One brief passage about the change in his parent’s attitude reveals a surprising aspect of human nature under trial: his father who bitterly lamented the rise of Hitler’s power becomes almost giddy with excitement when the horror begins, while his religious mother, who started out optimistic, begins to withdraw into depression and anxiety.

One thing that is especially fascinating is that Keilson never actually defines his adversary as Hitler. He uses the term “B” to represent him, although it’s clear of whom he speaks: a man with an evil plan and the power to implement it. Yet, at times “B” is also portrayed as an intangible force, a concept of evil bigger than the Holocaust. The ambiguity gives the reader pause to consider what defines evil and apply the revelations experienced to virtually anyone suffering oppression. Incidently, I was curious if by using the initial rather than the name, Keilson is attempting to lessen the power of Hitler’s name, giving it less fame. For example, notorious killers today are well known by name: Ted Bundy, Lee Harvey Oswald, or John Wayne Gacey. After a period of time when their horrific deeds are forgotten, they become simply a pop culture reference. By not using Hitler’s name, it could be that in some small way, Keilson doesn’t want to give him any further notoriety.


Special thanks to Farrar, Straus and Giroux for the Review Copy.
For details on Keilson’s life experiences as well as details about both of his newly rereleased titles, see the link below.
http://www.latimes.com/entertainment/news/la-ca-hans-keilson-20100926,0,2360516.story