In Pursuit of Silence by George Prochnik

Listening for Meaning in a World of Noise 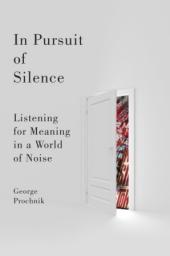 One recent beautiful day, I was curled up with a book outside, enjoying the change in the light and air of fall, with a fat orange cat on my lap. The baby was asleep, work was done, and it was finally a chance to relax. It was bliss.  All was quiet.  Quiet, until an extremely loud dirt bike, without a muffler, began doing circuits of the road below my house. I went from peaceful and content to plotting murder in mere seconds…just the whine of the engine made my teeth ache. The fact I was reading this book made the noise all the more relevant.

George Prochnik takes a subject that is universally annoying and studies it in ways that are both fascinating and frightening. He examines the sounds, both in volume and type, that trigger aggression (see dirt bike above). In one chapter he discusses scientists who study the cries of infants that makes them particularly vulnerable to abuse (and what can be done for prevention). He takes the research further and shows how some sounds are actually used in torture (see dirt bike above). For example, prisoners in Guantanamo Bay are sometimes forced to listen to the cries of screaming infants overlaid with a track of repeating Meow Mix commercials.

He also investigates where sound is used for manipulation in a retail setting. He meets with the sound designers behind Abercrombie & Fitch, who intentionally design the retail space to flood the ears with rapid, pulsating music to mimic a rave or nightclub. The lights are intentionally dim, so that a customer feels more like they are at a party than a store, and they’ll likely pay less attention to the price tag and more attention to the atmosphere. Geared towards college age students that have left home for the first time, A & F manipulates their senses for profit while at the same time creating and branding their identity of ‘cool’. Prochnik also examines the science behind music played at grocery stores, restaurants, and bars. If it’s too fast, customers will eat faster and leave before they run up a tab. If it’s the right pace and overly loud, researchers have found they will actually drink more alcohol, since gesturing for another drink is easier than conversation.

Some anecdotal findings throughout are fascinating, as he travels from a monastery where silence is required, and out into the streets, where boom boxes, car stereos, train whistles, and sirens bombard the area with noise. In no way is he a cranky old Mr. Wilson, yelling at the kids to shut up. Rather, he’s fascinated by the science of it all. For example, scientists in Japan devised a “Mosquito Teen Deterrent” that is a sonic repellent-it makes a noise only audible to those under 20 years of age. This was used in areas where the police and storekeepers wanted to prevent teenage loitering, but its use is now up for debate in terms of ear damage. The invention was shown in one of the most memorable episodes of 30Rock.  Clever teenagers managed to turn the tables on adults by using the same technology to create a cell phone ringer that could be used in class-the teacher couldn’t hear it ring!

Is sound really a matter of personal preference? Can laws really be enforced to control sound output from cars or homes? Prochnik investigates the influence of loud noise on health, and one especially interesting finding was that excessively loud noise, such as at a rave, actually makes the drug Ecstasy more toxic to users.

Beyond the noise itself, he also researches and explains new developments in sound proofing and the new industry that has been built up around the desire for peace and quiet. New materials and inventive uses of old technology can create homes that actually resist external noise.  This book covers a great deal of material, and at times it’s too much to absorb at once. But the chapters can stand alone and can be returned to without losing the conceptual thread.   In all, it's a fascinating book made especially interesting by the quick writing and large amount of cited evidence and details.


Special thanks to Judy Jacoby of Doubleday for the Review Copy.
Posted by Amy at 6:15 PM