Translated from the Portuguese by Idra Novey
“Poetry is to flap without wings.” 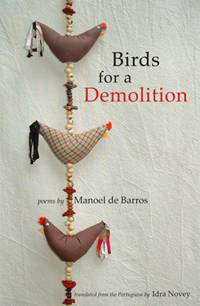 Birds for a Demolition is a compilation of a variety of poetry styles by Manoel de Barros, with some arranged more formally in stanzas and others appearing as short proverbs. A repeating topic is his early life in Brazil, in a region called the Pantanal. His small town and his childhood home next to a river clearly holds significance. He talks about the river often, and even uses the word as a verb at times. His voice is both somber and humorous, and when he gets a bit nostalgic, he reveals both.

In Invented Memoir II, he writes of his birthday as a boy, when his mother had no gift to give him. So she gave him a river.

…The same river that had always passed behind our house.
I liked the gift more than if it had been candy from the peddler.
My brother pouted, he liked the river as well.
Our mother promised him he’d get a tree for his birthday.
A tree covered in birds.
I heard this promise and thought it was fine.
The birds would spend the day on the banks of my river.
At night, they’d sleep in my brother’s tree.
My brother teased that his present got flowers in September.
And a river doesn’t get flowers!
I told him a tree doesn’t get piranhas.
What united us was swimming naked in the river with the herons.
In this regard, our life was a caress.

Apparently, the river was something he held on to, both as a personal touchstone and a poetic motif.  While the poetry within this covers almost 50 years of his work, the focus remains much the same. Vines, lizards, adobe buildings, trees, and even ants are woven into more serious topics.

I didn’t need to read Saint Paul, Saint Augustine,
Saint Jerome, or Thomas of Aquinas,
Not even Saint Francis of Assisi---
To arrive at God.
Ants showed him to me.

(I have a doctorate in ants).

In just these six lines he does two things: reveals his inferred truth regarding life and creation, yet throws in a twist of humor with his doctorate remark. This pattern of mixing the serious with the blithe makes the collection much more vibrant and appealing. He does this in short proverbs in “The Book of Nothing”:

There are many serious ways to say nothing, but only poetry is true.


My dawn is going to open at dusk.


To have more certainty I have to know more imperfections.


I wanted to be read by stones.


Words hide me without much care.


Wherever I am not, words find me.


There are histories so true that at times it seems they are invented.


I want the word that fits in the beak of a small bird.

Note that the proverb style he uses above uses large breaks of space (caesuras or caesurae??) to give you time to stop and reflect rather than move quickly through the verses.

Lastly, he applies a paragraph form to some self-deprecating words of explanation in a section called "Desiring to Be":  "I write an archaic Manoel-esque idiolect (Idiolect is the dialect idiots use to speak to the walls and with the flies.)  I need to upset meanings.  Purposelessness is healthier than solemnity.  (To cleanse a certain solemnity from words, I use manure.)...The cerebral touches in my writing are just a precaution to avoid succumbing to the temptation to make myself less foolish than others.  I am highly regarded for my foolishness.  Of this I deliver certainty."


Special thanks to Cynthia Lamb of Carnegie Mellon University Press
for this Advance Review Copy.
This title releases today, September 30, 2010.
Posted by Amy at 12:04 AM