The Homecoming Party by Carmine Abate

Translated from the Italian by Antony Shuggar
Caution: Do not read while hungry. Heavy emphasis on Italian food delicacies will leave you a bit weak. 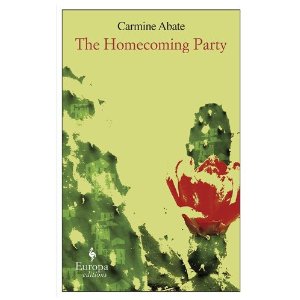 The Homecoming Party tells the story of a father and son, and their close relationship despite geographic distance. It tells of the childhood of Marco, a boy who grows up mostly in the care of his mother and grandmother because lack of work required his father to travel to France. This leaves him as the man of the house essentially, although his older half-sister and baby sister ignore him. His father’s infrequent visits are the focus of his life; he spends most of his year awaiting them. His days are filled with school, exploring the rural region with his dog, and playing soccer with his friends.

While they live in Italy, they are ethnically an Albanian village that still speaks the Arbereshe language. It’s from this home region that his father must journey to France, accepting horrifying work conditions just to be able to send money home. He remains faithful to his family, and the distance tears at him. It’s in his absence that his oldest daughter starts to behave strangely, and begins distancing herself from the family.

The story begins with the father returning to the yearly Christmas bonfire in the small village. He’s happy to be home, and generous with food and gifts for the villagers. However, as father and son sit to observe the flames, they discuss the peculiar events of his sister, and flashbacks occur that explain the closer connection between father and son.

This fairly simple story packs an unexpected punch. First, it reminds you of similar people who have to travel to distant lands for work and basic sustenance, and the danger it puts the family in. It also reminds you that danger can be present anywhere, and not just found on a distant shore. Lastly, the power of language, even the difference between a dialect and a language, is revealed in some of the complexities that occur: a battle between the old world and modernization leaves little place for variance.

The plot is strong, as it backtracks through events, and the alternating voices reveal more than just what the child or the father may have understood on their own. A few times, however, I had to back up a several pages to figure out who was speaking, and also get back on track with the timeline of events.  Since the father and son are the focus, very little was drawn out about the women in the family and what influenced them: I wish that had been expanded on a bit more as I think it would have helped explain some of the issues. The descriptions of the scenery, and the simple details of family life and delicious food create a lovely backdrop for the moral issues in play.


Special thanks to Europa Editions for the Review Copy.
Posted by Amy at 1:11 PM