The Hare with the Amber Eyes by Edmund de Waal

Antiques are often more valuable when their provenance can be determined, and the more details regarding ownership and travel, the better. Thus, the extensive history of the tiny netsuke described in this memoir makes them essentially priceless. Purchased in Paris in the 1870’s, the travels of these tiny figurines reveal a much bigger and more important story than one could imagine. In fact, the general history of WWII and the days leading to it, across the European continent, are a part of their history.


This ‘art memoir’ combines a narrative of both the personalities of the owners and world history into the netsuke origins (see photo).  Edmund de Waal, who began to research their origins in 1991, is an esteemed porcelain artist on his own, and his perspective on the netsuke is more insightful due to his own artistic vision and relation to the family. It’s both personal and historical.

The collection was held by his uncle in Tokyo, and had been passed down from their original purchaser, Charles Ephrussi, in the 1870s. Charles Ephrussi was the ultimate collector. Wealthy beyond imagination, he left Paris for Italy and made extravagant purchases for his Paris apartment. He hung out with Proust, Renoir, and Degas, and was part of the high society in Paris that revered all things related to art and literature. De Waal uses impeccable research to discuss the catalogues of possessions that Ephrussi owned and the family dynamics in that opulent age. However, one detail made all the difference. Ephrussi was Jewish. Thus, while he died before the worst came, his family suffered greatly and the netsuke made their own significant journey. 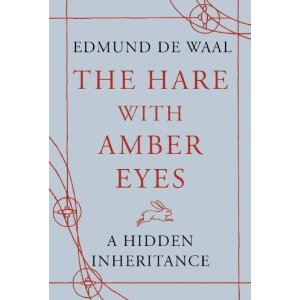 The book examines what happened in Vienna to the Ephrussi family in 1938, when Hitler’s power was at its height and when both soldiers and common people decided to take away the wealth of the Jews when they had the opportunity. First, brown shirts invaded the homes of the Ephrussi family and simply smashed and destroyed what they wished. Then they returned and took the paintings and books, cataloguing them with photographs so that Hitler could personally decide what to do with them. Their money was stolen. Some family members managed to escape to other countries, but it meant leaving everything behind.

In all the violence, a lowly maid named Anna (a Gentile) managed to quietly hide the netsuke in her mattress, and held them, not for certain profit but for the opportunity she was sure would come, when she could return them to the family. Her loyalty inspires the author, yet the irony of the netsuke’s survival is not lost: “why should they have got through this war in a hiding-place, when so many hidden people did not? I can’t make people and places and things fit together any more. These stories unravel me.” Thus, 264 of the netsuke were restored to descendents of the Ephrussi family.

Reading more like a thriller than a memoir, the details are rapid and shocking. Seeing how ordinary people behaved in horrific circumstances was revealing, in both their noble and barbaric acts. De Waal does not write simply in facts, but reveals subtler clues to the people involved. Rather than simply noting the wealth of Charles, he uncovers a more personal trait; Charles “does not know when to shade eagerness and become invisible.” Thus he makes a story of objects also an exploration of character.

This is truly a beautiful book. I’ve had to read a few art histories that seemed stale-there was no personality behind the stories. This is amazing both in content and form, as the lives interwoven with the netsuke make them unforgettable. I visited the Santa Barbara Museum of Art’s recent Asian exhibition in hopes of seeing netsuke firsthand. There were none to be seen, and nothing that was displayed struck a chord within me as did the stories behind these pieces.


Special thanks to Chatto & Windus London for the Review Copy.
Posted by Amy at 2:41 PM