If you are going to make a journey, you know it’s not going to be dull if your companion has a reputation for getting into fights. It could even be dangerous if you are travelling to a location still rife with racial and cultural tensions. Thus, it’s with great wisdom that Tony Fabijancic’s wife suggested his father go along as guide and possible referee on his journey to Bosnia. Why Bosnia? 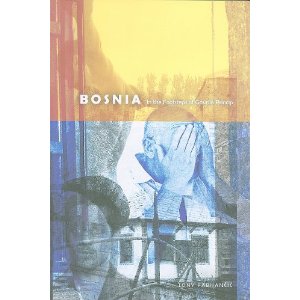 First, Fabijancic’s father emigrated from Croatia, and the region has held his son’s fascination for a lifetime. But more intriguing is Tony Fabijancic’s obsession with understanding Gavrilo Princip, an obsession that leads him to research the cultural, political, and geographical influences of the former Yugoslavia-then and now. The result of that trip is Bosnia:  In the Footsteps of Gavrilo Princip.


I never knew Gavrilo Princip by name, only his identity as the man who started WWI with his assassination of Archduke Ferdinand in 1914. I didn’t even see how the event was that big of a deal; as noted in the book, assassinations in the area weren’t exactly unusual. Why was the impact so big? And why did Princip do it in the first place? It’s a subject I’d wondered about but never pursued.

Similarly, in the 1990s, when the Bosnian conflict headlined the news, I had no way to differentiate between a Croatian, a Bosnian Serb, or a Muslim Slav, or if Kosovo was a person or place. I hate to admit that before this book, I probably couldn’t have found B-H on a map; my knowledge being especially vague about Yugoslavia and the USSR. And while history at times can be boring, learning it from the personal perspective usually enlivens it. Thus, this book is far more powerful than its size would suggest. From the perspective of a road trip, with anecdotes and photographs that make the journey more personal, a reader learns the history of the region from Austria-Hungary’s occupation through the Baltic Wars, the breakup of Yugoslavia, and the Balkan Wars in the 1990s, as well as the religious differences (Muslim, Catholic, and Orthodox) and the racial divide that still fuels pride and conflict.

The author addresses part of the image that Westerners may have of the area: “Because of Bosnia’s reputation as an inherently violent place, filled with ‘ancient ethnic hatreds’, it finds itself squarely situated within the ambit of the Balkans, which have acquired derogatory qualities in the West’s wider social imagination.”

He meets a Croatian shepherd that still lives off the land with his flock for weeks at a time, a lifestyle that’s millenniums old. They drive through cities nearly abandoned, houses still showing the scars of bombings, villages with just a few old residents remaining, and long neglected cemeteries. The ethnic divides are still steep, and various regions still feel volatile to a nervous traveler. Some subjects are simply not safe to talk about, as Fabijancic learns. Even the character of Princip is conflicted: some view him as hero, others as a scar on their reputation. As the travelers retrace his journey to Sarajevo, where he ultimately succeeds in killing Ferdinand, they are able to see places where he had lived, socialized, and plotted. In uncovering the history of the Serbian lands, they simultaneously uncover the biography of Princip, the events of the assassination, and the trial that ensued.

At one point, they visit the bridge over the river Drina, a location famous in literature by Nobel winner Ivo Andric and also in history: in 1992 “hundreds of Muslims were herded onto the bridge and along the riverbanks, murdered and dumped in the Drina, turning its green waters red. Others were forced into buildings and incinerated alive.” This type of ethnic cleansing occurred on all three sides of the conflict, but the realization that this happened within my children’s lifespan is a bit staggering. The violence in the conflicts seems especially heinous.

This is not a dry read…it’s sobering but still amusing at times-it reads like a novel. It reminded me a bit of Andrzej Stasuik’s Fado although exploring a different region. This is the way history should be read-through lively narration and not dry data and charts. I am terribly enthusiastic about this book because it feels valuable-it doesn’t solve the problems there but by neutral observation it helps an outsider understand them, as well as the bigger picture of the brutality of mankind’s yearning for domination.  The photography should be noted:  the black and white images are stark and bring out the humanity in the faces shown.


Special thanks to Cathie Crooks of Canada's University of Alberta Press for the Review Copy.
Posted by Amy at 8:47 PM