Translated from the Icelandic by Lytton Smith 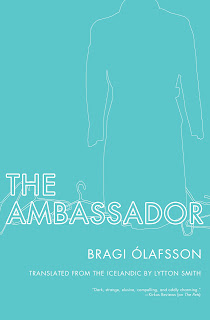 It’s tough being a poet. First, there’s the whole stereotype of the cerebral, tortured artist who offers the world little but obscure verses. Then your Dad starts doing the passive-aggressive thing and slights your work whenever he can. Your son calls your career a ‘hobbyhorse’. You get no respect.

This is the world for Sturla Jon, a sucessful poet from Iceland. He’s tough, sarcastic, and is finding it hard to even respect himself anymore. He still writes poetry, but since he’s hit fifty, he wants to do something more. Novels, maybe. He’s dissatisfied with most of his life, and it’s starting to show:

“In Sturla’s opinion, there is an irony to this that results from a deception the poet himself perpetrates: when it comes down to it, his value is only ever evident from the price tag on the book…”

And to make one big step away from the starving artist that he imagines typical poets to be, he goes out and buys a top-notch overcoat, high style and big money. He’s old-fashioned, and decides the cell phone pocket will be perfect for his cigarettes. That one detail shows a great deal about him: he isn’t fitting in with the times.

“One moment Sturla feels there is depth and purpose to his writing but the next…he, the poet, starts to think that he can’t see anything in the production of poetry but emptiness and the surface emotion that still lifes offer: more or less beautiful textures, at best, things better suited to being the subject of a watercolor on the wall of a room.”

So with this new overcoat, and an invitation to a poetry festival in Lithuania, he makes a new plan. He’s going to move towards an experimental form of literature, and 'review' the events of the festival before it even happens. His cynical and disparaging review reflects all the clichés of poetry, and poetry festivals in general. Bad food, terrible lodging, and worse, pretentious poets who take themselves far too seriously than he thinks they deserve. His caustic review makes him feel fresh and innovative, and he leaves for Lithuania with low expectations.

However, despite the fact he condemns the poet’s lifestyle as often as possible, it’s revealing that he still wants to go. Why not just skip it? This is one of the complicating facets to Sturla: he’s not really sure what he wants to be, and at his age, it’s hard to change. His life is full of contradictions: he wins money (that he doesn't need) at a slot machine when he’s just killing time, and his aging father gets more attention from the ladies than he does. While he works part-time as a building superintendent (possibly the diametric opposite of a poet), he likes to hint to people that he’s a published poet. Who is the real Sturla?

Only in Lithuania does Sturla even begin to understand just how he fits in, and his exploits there are terrifying, frantic, and sometimes slapstick. He realizes that his “predicted” review is not only wrong, but almost criminally so.

Lest this sound too serious, keep in mind that Sturla is possibly one of the funniest characters I’ve run across. He’s snarky and witty, and throughout the narrative there is a remarkable amount of humor as he pokes fun at himself, his family, and most of all, the literary world. The author, Bragi Olafsson, writes Sturla as the least expected poetic figure: needy yet badass, sensitive but acerbic, and always unpredictable.

The book in whole is more comedic than serious. Yet it also gives a unique glimpse into the world of literature and translation, cultural disparities, and historical influences that define a geographic location. I loved the little things that make Sturla a real person: the way he’s annoyed by his Dad’s constant calls on the new cell phone he finally gets, his simple desire to just get a cup of decent coffee, and the way he mentally rehearses little remarks to himself to get them right.  Additionally, Olafsson hints at the need for poetry and literature as a means of dealing with the contradictions and complexities we all face.


Special thanks to Chad Post of Open Letter Books (University of Rochester)
for the Advance Review Copy.
This title released yesterday, October 12, 2010.
Posted by Amy at 8:53 PM