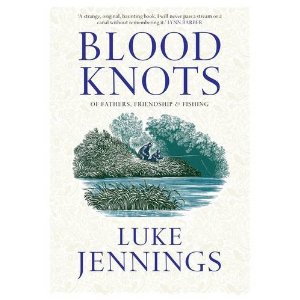 Of Fathers, Friendship & Fishing
Luke Jennings memoir starts out as peaceful recollection of his early childhood and his drive to learn to fish. He recounts his upbringing, his fascination with the natural world, and his early fears while in the theme of angling across England. He speaks fondly of his father, as well as a country hand named Tom who helped him learn the intricacies, indeed, the art of fishing. Patience and observation are skills he learns that serve him for a lifetime.

What is the appeal of fishing? “On the surface, the answer appears simple: to catch a fish. You want to deceive a wild creature, take it from its element, marvel over it and return it to the wild. But that’s only part of it – what you call the ego element. The living, wriggling proof of your skill and cunning. Proof that, in the right circumstances, you can get one over the natural world.” It’s partly the hunt but also the mystery that draws him, “What I can’t explain is that…it’s the revelation – the opening and closing of the shutter on an alien world. The tall, mysterious chamber of green, speared with light but vanishing into darkness.”
As his life progresses, naturally it becomes more complicated. He forms friendships and looks to his future with a range of emotions. His British life is continually touched by historical and political events both past and present, and he finds his way trying to balance that knowledge and still maintain the childhood mystery. He always returns back to the pond or river to restore his outlook. He soon becomes acquainted with a larger-than-life figure, Robert Nairac, who influences his life as a friend and mentor, teaching him history while at the same time teaching him falconry. This influence can’t be minimized, and no doubt the violence that ends Nairac’s life is both shocking and somehow expected.

Throughout, however, the return to nature is much as Wordsworth describes-a function to restore peace. The book itself is peaceful, quiet almost, and the descriptions of landscape and people are detailed and revealing. The overall feel is just as soothing as a river, even when tragedy occurs. The author also is clearly devoted to fishing: he drops names of famous books and fishermen in British culture that may well be familiar to readers there. His description of fishing is not a hobby, but a lifestyle.  Conquering the wild indicates more than a subtle hint about his personality.

While I enjoyed it overall, a few times the quiet pace felt a bit numbing. It seemed repetitive in some of the descriptions of the ‘hunt’. The other thing, strictly a personal issue, is that I simply cannot comprehend ‘catch and release’ fishing. It is supposed to be more humane, but seems barbaric to me. If someone wants to fish to provide food, fine. But to hook a fish, possibly damaging its mouth and scaring it to death in the process, just to throw it back, seems kind of sadistic. I realize it’s the thrill of the hunt that Jennings explains, but I still don’t understand. I realize some hooks are not barbed, but still, it yanks on their body and they fight against it, perhaps damaging their gills or other fish parts, for what? Lastly, since it is a true story, I thought photographs of some of the locations and people might have been helpful.

Special thanks to Atlantic Books in the UK for the review edition.
Posted by Amy at 8:00 AM