Strangers at the Feast, Jennifer Vanderbes

The first thing I thought of as I read this book was that Vanderbes writes people very well.  Her characters are complicated, flawed, and still sympathetic.  None of them are stereotypically good or bad.  Rather, they are real.  This book has a large cast of characters, and each of them remains memorable even though I've finished the book. 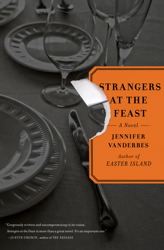 The premise of the book is the gathering of a family for Thanksgiving.  The two parents, Gavin and Eleanor, their adult children, Douglas and Ginny, as well as Douglas' wife Denise and their children all congregate at Ginny's house for the big dinner.  A surprise guest is Ginny's new adopted child Priya, a mute seven-year old girl from India.  The novel splits into different narratives as the author describes, third-person, each of the characters.

Eleanor, an aging sort of Mrs. Cunningham (from Happy Days), is controlling yet naive, with no grasp of how to interact with her family except to tell them what to do.  Her focus is on material objects:  the perfectly set table, the correct baking temperature for turkey.  She appears unable to have a real conversation with anyone.  In fact, she inwardly wonders if her adopted granddaughter came with any "guarantees".  Her life has only one focus:  motherhood.  She constantly questions why her children don't appear to need her anymore, while she remains devoted and willing to do anything for them.  She's even known to send herself cheery postcards, and while at first she annoys, you realize the pain that makes her act this way.

Ginny is her daughter, an academic who lives to show off her knowledge and gloating at any perceived ignorance. Her knowledge is a cover for her feelings of worthlessness.  She's adopted Priya suddenly in a grasp at finding meaning:  instant motherhood is the answer she comes up for in her search for happiness.  Sadly, she can't seem to relate to the child in any degree, and treats her more as a small housepet.  Her head knowledge leaves her little common sense, and her proposed feast becomes a disaster.

Douglas is a verifiable doofus, a real estate developer sinking into debt, who annoys everyone with his fascinating for discussing hypothetical situations: 'what if you won the lottery!' In this way he can avoid the reality of his financial ruin.  His wife can't stand any of them, and only tolerates them because she dislikes her own family more.  Lastly, Gavin, the patriarch, is a Vietnam vet who feels worthless in his life as an insurance salesman, and feels threatened by anyone elses's success.

With a good premise and great characters, this novel has all the makings of a classic.  Only the plot is a little bit disappointing.  The character studies go on a bit too long, enough to make you wonder what the point is.  An undercurrent of an impending crime is hinted at, but occurs late in the novel.  The denouement is a bit unsatisfying as we never see how the characters evolve in any way, except for Eleanor.  However, her transformation is the key to the novel and saves it in the end.

While I enjoyed the author's voice, and the way it was snappy and fast-paced, she seemed to get off topic in a few places, namely a long discussion on Vietnam, another on menopause, and a thread on urban blight in the city.  These detours were distracting and stalled the narrative quite a bit.  The sudden denouement also felt forced.


Special thanks to Scribner Books for the Review Copy.
This title is on sale now.
Posted by Amy at 12:05 AM