After you finish reading Exley, by Brock Clarke, you may need to take a few moments to catch your breath. You may not sleep well, and that’s certainly not because of anything horrific or scary in the book. This book, quite simply, messes with your mind. 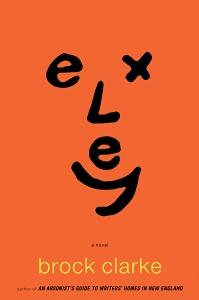 First, the characters are wildly created and completely unpredictable. It starts with Miller, or M-, who is a child prodigy on a quest to find his father who left the family suddenly and without explanation. He’s a weird little kid, but likable, and you can’t help but feel sympathy for him as he misses his dad.  The only explanation he can find is that his father must have left for Iraq (they live in an army base town), and this explanation doesn’t sit well with his mother. She arranges for him to meet with a psychiatrist to discuss Miller’s ‘wild imagination’. Miller and the doctor form a tentative relationship, with Miller’s explanations sounding more reasonable than anyone else’s.

The key to all of this, to separate it from any number of books about dysfunctional families, is Exley. Frederick Exley, is the author of A Fan’s Notes, the favorite book of Miller’s father. His father’s so tied to Exley’s books that when he gets a phone call on 9/11 to tell him to turn on the television, he can’t be bothered. He’s too busy re-reading the book. The book becomes Miller’s only connection to his dad. He carries on his father’s obsession and turns to Exley (or at least anything even remotely related to Exley or his writing) to bring him back. With book in hand, he searches all over Watertown to find a connection and an explanation. In between searching, he teaches his father’s English class at the Junior College, meets a mysterious young woman who may have known his father, and visits the VA hospital searching for clues. This is one busy kid.

The psychiatrist, Dr. Pahnee, isn’t exactly the appropriate choice for a mental health professional for Miller. This makes him perfect in terms of the book. Because while Dr. Pahnee utters the traditional psychobabble, he’s also not above prowling Miller’s house when no one’s home, and following him around to verify if any of Miller’s claims could possibly be true (both of them on bikes). He’s not above hitting on Miller’s mother, and as several of the chapters are written as his patient notes, we see just how far out of the range of normal he is. He is given to uttering repetitive phrases-repetitive and, indeed, annoying. (Just like that sentence!) Quirky doesn’t even begin to describe him.

Clarke writes the characters in a brisk way that creates instant visuals: he describes the father “like a bear with hurt feelings.” The mother is an uptight lawyer whose emotions are best deciphered by the position of her hands on her hips, and who is so rigid that her business suits are assigned a certain day to be worn. Everyone else that Miller meets fits the same non-mold, and the effect is dizzying. Despite the craziness, there is a genuine thread of humanity that aims to understand how much (or how little) of what we want to believe relates to what actually is true. It also toys with the idea of imagination as a therapeutic process, a means to adjust to and possibly accept changing circumstances.

The book reminded me a bit of Jonathan Safran Foer’s Extremely Loud and Incredibly Close, which has a child protagonist on a similar journey. Yet Clarke’s novel has a more satisfying ending, and doesn’t fold up quite as neatly. The flawed and outrageous characters for the most part were still sympathetic. My only irritation was that the character of Miller’s mother seemed apathetic much of the time, and insensitive to Miller’s father need. And to be honest, at times the unpredictable events almost became predictable once you get involved into the story…it’s as if you begin to expect more of the same. The cleverness that was refreshing at first, did, albeit only a few times, get stale.


Special thanks to Megan Fishmann of Algonquin Books for the Review Copy.
Posted by Amy at 7:35 PM