The Rest is Jungle by Mario Benedetti

Translated from the Spanish by Harry Morales 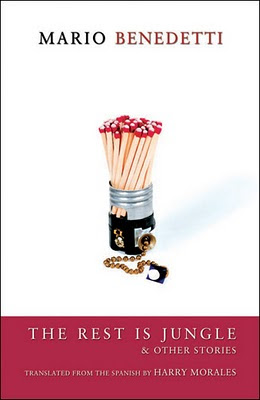 Mario Benedetti is from Uruguay and the short stories within this collection are mostly set in the cities and villages of the South American nation.  It would be incredibly cliche to say that these short stories feel tall, but they do.  Some are only a few pages long, but the lingering effect is one of sighing acknowledgement that yes, this is how it is.

For, while diverse in characters and settings, Benedetti captures all the nuances of families and friendships, and the mind games that play on even after one participant is dead.  Not all are depressing, some actually made me laugh outright.  But it's an incredibly complicated study of human nature (a psychologist would probably love to evaluate this book and name all the symptoms) that never gets dull and is never predictable.  Pay attention to the clues, just when you think someone may laugh they instead deliver a fatal blow.  Benedetti doesn't do much foreshadowing (there's hardly time in a short story) so surprises occur.  His writing is so subtle too, that after a particularly traumatic event takes place, he simply continues with the story and lets you reel from the implications instead of spelling them all out.  He credits the reader with the intelligence and savvy to foresee what may happen, and doesn't prescribe it.  This lingering sense of wonder will have you returning to the plot later, in your head, as you continue to grasp what went unsaid.

"The Sweethearts" is one of the most perplexing of the stories.  A young girl is orphaned when her embezzling father commits suicide.  An outcast in the city, one family opens its doors to her, and she becomes friends with the family's son.  Almost thirty years pass in their friendship, and what you may expect to happen never occurs.  Instead, you see how a common bond of dysfunction creates a strange world that neither escape from, nor appear to want to.  Benedetti is especially observant when he notes how the community treats the innocent child:  "that duality was that the good families were always ready to smile..." at her, but at the end of the day "this fulfilled their quota of Christian pity, while at the same time allowing them to conserve their energy for that hour when they closed all the doors of all their houses, separating her from all...and making her feel that she was somewhat tainted."

"The Rage Has Ended" was poignant and subtle, told from the voice of a loyal dog who is the only witness to its owners adultery.  What the dog senses, and what it does, makes a tangible character in the play of secrets and lies.  And while the dog knows loyalty, he doesn't understand revenge.

"Completely Absent-Minded" is one of the more amusing stories, of a man who flees his country for political reasons.  He travels the world, not caring much about where he is going, completely lost in the thrill of the journey.  "He liked people, but he didn't bond...."  and "He got along well with children and dogs".  Benedetti takes pains to describe the details that matter to the traveller, and more importantly, the ones that don't.  The man mixes up nations and rivers and continents, shiftlessly journeying on. Along with him the reader also becomes disoriented as to his place in the world, and the strangely appropriate ending is still somewhat devastating.

Especially nuanced are the stories told of fathers and sons.  Both wishing to appear to be more than they are, to impress the other.  The dynamics are the same no matter how wealthy or poor, good or wicked, or even how tragically bored some of them may be.

The collection contains about 35 stories and some of them are expressed in an enjambment that is nearly poetic.  On one page a quote from Benedetti sums up the book beautifully: "We are a small nook of America which has neither oil, nor Indians, nor minerals, nor volcanoes, nor even an army dedicated to coups.  We are a small country of short stories."


Special thanks to Host Publications for the Review Copy.
Posted by Amy at 1:19 PM