“Was this nothing but a shadow of what never was, a memory deliberately implanted by years of storytelling? That’s how powerful stories are. They can actually create the past if told often enough.”


So it is with Hallie James, a young woman in Seattle, mourning the loss of her mother who died when she was just a child. Memories of her mother are vague, but she grasps upon any connection with her. Her father raises her alone, and shortly before his death she receives a shocking letter. Her mother never died at all, and up until very recently, had been alive. It soon becomes apparent to Hallie that her father had kidnapped her as a child, taking her away from her mother and their home near the Great Lakes. The memories she had were all fairy-tales. 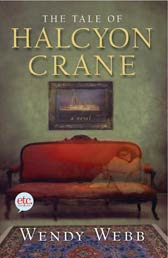 Why would he do this? As Hallie returns to her birthplace, mourning the loss of both her father and the mother she never knew, she has to unravel the mystery of why he stole her away. Solving the mystery means making new connections with people from her childhood and discovering that in abducting her, he had staged their own deaths. The townspeople are convinced her father was evading a murder conviction, and now she has to evaluate the father she loved and the evidence she finds. She can’t harmonize her own memories with the accounts of him by others, and the mysterious activities on Grand Manitou Island that occur after she arrives.

This is an old-fashioned gothic story mixing past and present, with an easy pace of action that makes it very readable. The voice of Hallie, whose real name turns out to be Halcyon Crane, is witty, self-deprecating, and warm. She appears to be an intelligent woman trying to solve an especially personal mystery.

That said, I found the story a bit too predictable, and as it unfolds the mysteries are solved a bit too easily to be believable. Hallie, despite her intelligence, appears to trust everyone on sight, despite the curious events that go on around her. The characters on the island are stereotypical: the charming barista, the shrewish innkeeper, the creepy housekeeper, and the wonderfully dependable male lead all fill their expected roles. As a young adult novel, this could work. For an adult, it came off childish. Its attempts to be scary and suspenseful ended up being downright silly. I could actually see this being a pretty interesting teen movie if there was a way to amp up the suspense and create a bit more realistic complexities.


Special thanks to Jason Leibman of Henry Holt for the Advance Review Copy.
Posted by Amy at 6:04 PM