In the Train - Christian Oster

"She looked at me from behind her glasses, not as if I was the ideal she was looking for in the world, on the contrary, she seemed to be thinking something wasn't quite right, in what she was seeing, or that her glasses weren't properly calibrated for me, or that I was a smudge on her lenses." 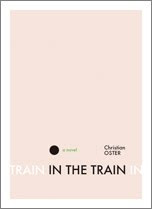 Frank likes to hang out at the train station to meet women and that, hopefully, someone that will need him.  He finds the world of travellers fascinating, and even buys tickets (that he may eventually return) just to have a reason to follow them.  He's the kind of person you don't make eye contact with in any location:  creepy, uncomfortable, and moody.  And yet, he's terribly honest with himself and everyone else.  His honesty is what appeals and repels at the same time.

In Christian Oster's novel, In the Train, Frank ends up following Anne on to a train out of Paris, using just the smallest interaction of helping her carry her bag to imagine an entire life and future with her.  Oster reveals all of Frank's thoughts and concerns, from the trivial to the astonishing:  he truly thinks that carrying her bag not only attachs her to him but allows him to begin controlling her.  It would be creepy if it wasn't so funny.

After they part at her stop, he ends up following her to her hotel, inventing an excuse to stay.  After he checks in, he imagines how to meet her again, casually, eventually knocking on the doors of each room, looking for her (because it would be tacky to ask downstairs!).  Eventually he finds her and she greets him with resignation and fear.

The novel continues with their strange connection:  he obsessively questioning every single word, looking for clues to her devotion, and her hesitation, not quite sure how to deal with this curious stranger.  At one point, she goes to a book signing by a favorite author, and Frank is betrayed:

"It was disheartening." Frank thinks, "It was all a bit much in one go.  Before I even loved her, well, not completely, this girl was tripping me up with some man.  A rival.  Worse than a rival.  Someone established.  Perhaps not with her, but established all the same.....When, and this is precisely the point, love hadn't really carved its place out in me yet.  And jealousy was on the scene already."

Frank and Anne continue the journey, and the novel unfolds to a graceful conclusion.  The distinction in this work is the voice of Frank...sad and pathetic, yet hopeful.  Not realizing how his actions appear, he behaves in the only way that makes sense to him.  Senseless to everyone else, perhaps, but to him he's suave, logical, and appealing.  It's true, most of the time you are laughing at him, but there are also moments you just cringe and want to shake him into reality.  At no time does he appear malicious, just oblivious.  All in all, he isn't a bad guy, but making eye contact would be a mistake.

I'm sure there's some literary significance to the luggage that he helps Anne carry, that is with them in nearly every scene, and that ends up with Frank at the end.  But I was giggling too much to focus that hard.  I really enjoyed how Oster explored such an unusual personality without stereotype or judgment:  he just presents Frank as he is, and reveals unexpected sweetness too!


Translated from the French by Adriana Hunter.
Special thanks to Richard di Santo of Object Press for the Review Copy.
Posted by Amy at 1:41 PM