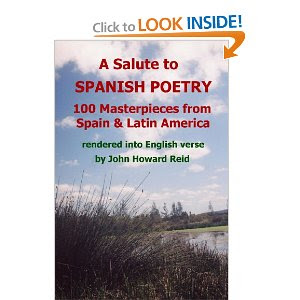 This is a diverse collection of poets and their poetry, lovingly translated by John Howard Reid, from the original Spanish or Portuguese. Despite the varying geographical origins, many of the topics are united: the shades of gray in shadows, the play of light and darkness, and the mysterious reflections of water, fog, and mist. Loneliness is a common theme, as is a feeling of desolation. But rather than dissolving into a sea of melancholy, this collection features other poems that illuminate playful charm, delicate romance, and unyielding devotion.

One of my favorites is from Jose Juan Tablada:


An Alternative Nocturne:
Golden New Yorker nights
Cold walls of Moorish limestone
A champagne foxtrot from Earl Fuller’s Rector Novelty Orchestra
Mute houses and barred windows
Glancing around
Over the silent roofs
The soul is petrified
White cats outlined against the moon
Like Lot’s wife
And yet
For all that,
It’s the same
In New York
And Bogota!
The Moon…!
The art of the collection lies in the translation from the varying languages and their particular dialects and styles. Some of the poets featured are Delmira Agustini from Uruguay, Carlos Oquendo de Amat from Peru, Gustavo Adolfo Becquer and Federico Garcia Lorca from Spain, Brazil’s Olavo Bilac, Argentina’s Leopoldo Lugones, and Julian del Casal from Cuba. Notably, Miguel de Cervantes, author of Don Quixote, is also included with his poem The Gypsy. Sixteenth century poets mingle with modern playwrights in a readable collection that never gets too heavy or depressing, or worse, too scholarly (and therefore inaccessible). The way the poems are linked in the order that they are featured must have some significance, because they seem to lead into each other, giving them a sense of a greater story in play, a novelization of similar thoughts.

This is a comprehensive collection featuring more than 50 well known and lesser known poets.  I found it fascinating to explore the poetry of poets I would have never discovered on my own.


Special thanks to the translator, John Howard Reid, for sending me the collection for review.
It is available on Amazon.com.
Posted by Amy at 9:39 PM